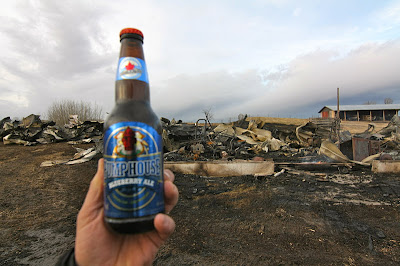 I couldn't find a more appropriate beer to review for tonight after a rather rough few days. The barn which  has been a staple in my wife's family for years came to an incredibly dramatic end on Wednesday night. A fire tore through the old structure within minutes and ended up an inferno that people could see from Edmonton a good 25 km away! Thankfully the wind was blowing in the right direction and nothing else was damaged and nobody was hurt. So in the end, they came out o.k as I believe it could have come out way worse. Still the shock of what happened is clearly evident with my wife and most of all. Her parents.

This does explain the slight inactivity on here, primarily with riding. I threw the towel in on two rides already in this amazing November weather we are having... Dang!

The beer for tonight is from a brewery named Pumphouse all the way from Moncton, New Brunswick. I read up on their website wondering when these crafty little buggers are going to talk about how their brewery is in an old firehall. It never came up and I found out later that the founder "Shaun" is a full time firefighter. Thus the connection...

I will come out and admit that blueberry beer isn't one I'd pick, but when searching for "fire themed beers" the picking is somewhat of a challenge.  Pumphouse gives this brew a good dose of blueberries mixed with peppery blueberries, malts and spicy hops. Is this the perfect pre ride beer? I load up on blueberries before long rides and beer is beer thus....

No I don't recommend drinking before or during a ride. That kind of shit ain't cool boys and girls! I poured this into a glass and looked at the golden, blond beer colour and wondered how this will taste like blueberries. The smell was simply great! The blueberry and spiced hops made me cry tears of joy. But will it taste like it smelled and I became worried. The first reluctant sip went well and tears of joy ran down my cheeks. A few more sips and it was gone and I sat bewildered wondering what to do. "Oh ya! I have more upstairs" I screamed. The second was a winner as well, this is not what I was expecting when I bought it, it was great because the blueberries were not overpowering like alot of other fruit beers seem to be.

A link to the barn pictures here. Don't click if you get sad when you see barns on fire! 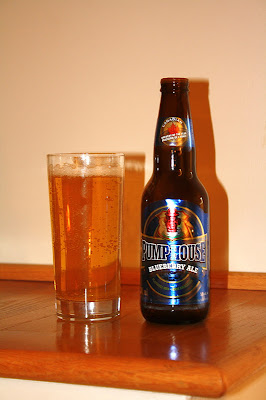