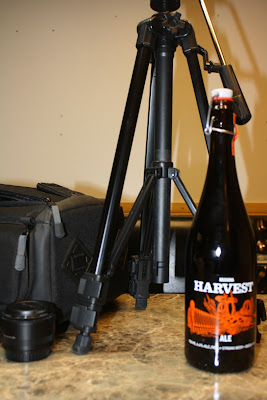 Four months past harvest? Why not! This bottle caught my eye the same way a bag of Doritos would attract many many potheads. It sat there in the store with a light beckoning from above. At first I thought it was heaven but quickly realised it was the lighting in the cooler... Silly me!  Muskoka brewery, from Bracebridge Ontario resides in the heart of Ontario cottage country and it now proudly makes it's second lonebiker beer review appearance (oh , I'm sure they are damn proud!).

Their Harvest Ale is now in it's second year and is their Fall time brew. Yes I know it's now the dead of Winter so you can just pretend it's Fall time now o.k? This beer is packed with a punch. A 6.4% punch that is. I have had trouble in the past with strong beers, so I wasn't going to take shit from this beer. I started to show it who was boss right in the store by speaking loudly at the bottle, you know, making threats. There were other people in the store at the time and they moved away quite quickly once I uttered my menacing threats at the bottle. Ya! I can be badass when I want to be!

Once home I opened it up and was awestruck by the  foggy goodness that was emanating from the bottle. It was at that moment I knew my threats had won over the heart of this strong beer. It sat for picture time with an attitude, and virtually no head. It was a one finger head (and you know which one that is) that quickly dissipated much to that of the dreams of a New York waitress. The first sip was what it was. A tad bitter, and then I had another and appreciated this beer for what it is. A craft beer made only once a year for the farmers... Or maybe the Oktoberfest people... I don't know. This one is a good, different but good. Buy a bottle and share it with friends (it's big) or just hog it all to yourself, the bottle is self closing you know. 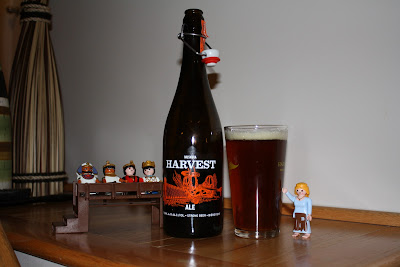