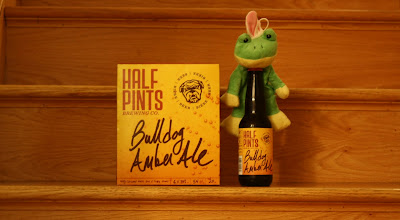 Were back after a long delay. I could complain about the lack of bike rides again but I'm sure you would just  roll your eyes and whisper under your breath something derogatory. So I won't, but in a sense didn't I just complain about not riding?

This weeks beer comes from Winnipeg. A city much like Edmonton that seems to have a bad reputation, but I'm sure, like Edmonton, if you got to really know it you would fall in love. They recently got back their beloved hockey team and have showed every other NHL Canadian hockey city how true hockey fans are supposed to act. It's tempting to go there just for a game to experience the madness. But I'll keep spending my money on Seahawk tickets and be a part of the madness there...

Half Pints started in 2006 and according to Wikipedia is the only craft brewery in Manitoba which made me wonder considering the popularity of craft beer now days. The brewery has four beers in it's line up and an additional seasonal beer which they claim to fill up one at a time with their hand bottler. Nice!

The pour gave us a strong golden colour that resonated "bold" and I stood back and trembled with excitement at the thought of this beer being in my own house. Once again like last week a powerful head stayed on top and did not dissipate lightly. A fruity and nutty aroma gave me the craft beer goose bumps and I was ready to try it. In a word it "delivered." A very nice texture with nuts and toffee flavour that leaves you wanting more once you down a sip. This beer had me at the pour and made me a believer once one it was done. This stuff is a winner. 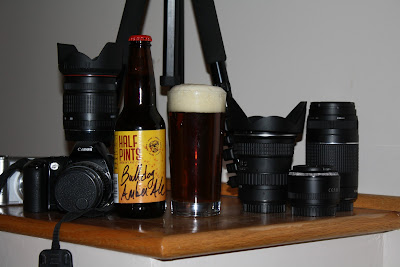