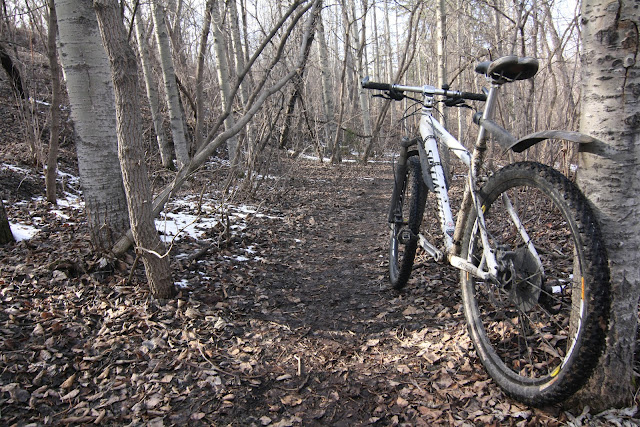 April 16th is a day synonymous with the official start of biking season (in my own little head of course.) The day started my second season of riding bikes when I kept a riding log courtesy of mountain bike magazine. I distinctly remember April the 16th 1993 as it was the first ride of the year when all the trails were completely dry. Albeit I had not quite discovered singletrack at the time, the multi use trails were good to go as they pretty much are now. Every year since then I wait patiently for this date and celebrate it like a birthday. Today I worked but I went out and partied afterwards, partied like it was 1999 all over again...


The last couple of years my April 16th rides didn't happen, to blame? Snow on parts of the trail? Nope.

I rode through the white stuff tonight after a dry run on the north side of the river. In the end it was a great ride, not the best of the year, last Friday will be hard to beat. I had the most contact on dirt so far this year and even tried to get adventurous on some poor drying multi use trails in Mill Creek but that ended as it should, with an incredibly muddy drivetrain that croaked and moaned.

All in all, it ended well and I now pronounce this season "open."