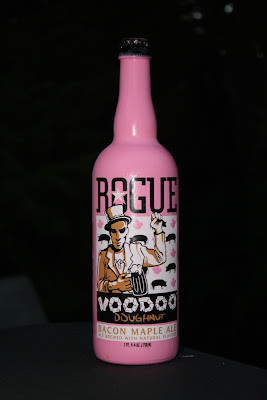 A return to the beer reviews on an incredibly nice Friday night, which is making me wonder why I'm in this dark gloomy den writing this when I could be in my backyard enjoying Summer for all that it is. I will be a trooper and push through this! You with me Bono? Ya, I know you log on and read this every Friday.

From Oregon, a State I'd say that doesn't get the recognition it deserves. A state that should be mentioned with the likes of California and Washington. Newport, Oregon is the home of this brewery with many bars across the state that serve these fine craft beers. The Rogue website gives you a guide on how to read their bottles, a blog (what dorks they are! ) and a sign up to some sort of hardcore beer drinking cult. You know, nothing out of the ordinary for a brewery home page.

Voodoo Donut Bacon Maple Ale, best served with donuts and pork (it says so on the bottle). The ingredients have a collaboration of bacon and maple syrup making my Canadian ass proud! And to think this beer is American! I opened up this big pink wonder, looked closely, took a big whiff and was a tad worried of what might come. Lot's of people would think this beer smells like breakfast but that had me a bit weary. I didn't bother pouring this as I wanted to enjoy the bottle for what it was. And that is absolute pure awesomeness! I had a few sips. Took time to gather my thoughts. Took a few more and started to appreciate it for what it is. A craft beer with a giant swing from out of the ordinary. This is not for everybody, the average Coors Light aficionado would turn his nose up at this type of beer. That's fine by me. A beer that has a real strong smoky taste with a hint of maple. Not too shabby... 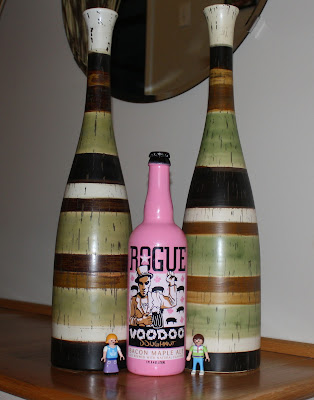