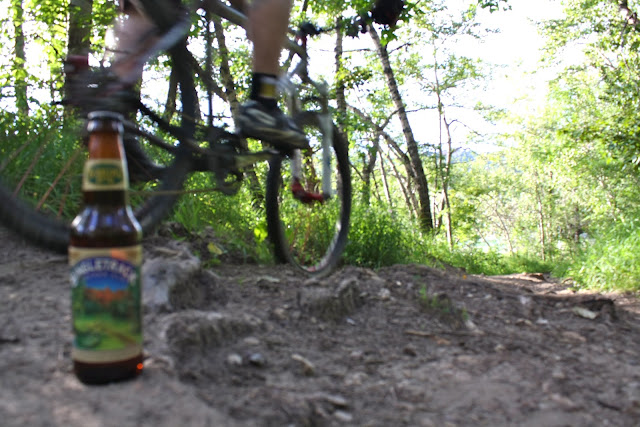 If you can remember waaaayyy back I received a gift from a dear friend. Six bottles of beer all themed to the great tune of the outdoors. Three were Singletrack Copper Ale and the other were individualy picked. I only reviewed one. The other five were taken to a top secret Lonebiker storage facility deep, I say deep in the bottom of the mighty Pacific Ocean where I knew they would be safe. It was just about a year when I got them and the Singletrack beer was the one I always said I would do in perfect conditions when I have been riding consistent and the moon and all the planets would line up, blah, blah, blah...

Well I finally said "screw it" and am reviewing Boulder Beer and their offering of Singletrack Copper Ale. First let me say, a beer named Singletrack? With a picture of a couple hardtails with a guy presumably taking a "potty break" photo.... Well I may have just died and gone to Heaven!

Boulder Beer hails from...  You guessed it. Boulder Colorado, one hell of a fine place to live if it's couches you fear! The countless outside activities are well... Countless. The brewery was formed in 1979 by two professors from the University of Colorado (Go Buffalo's) on a farm sharing room with a few goats. Singletrack Copper Ale is aimed at mountain bikers causing me to have a very strong bias  towards it. On their website, a quote. Okay hold on a second. Why did the text just get larger? What's going on? There we go... Damn. I think I finally fixed it. Sorry about that. That whole episode took about 15 minutes and I don't think it is back to par yet. The sentences seem to be separated by a large space. Oh to hell with this I'm gonna keep going...  The quote on their website regarding Singletrack beer, "Singletrack is an homage to the two wheeled athletes and weekend warriors pounding the narrow trails of our backyard mountains." I have tears in my eyes reading that, or is that rage from what's happening to this computer right now?


There was no pouring involved cause this a beer deserved to be drank straight from the bottle. The aroma was malty with a nutty tinge to it. I took my first sip and truly was delighted with what was hitting my lips, malt was there with what could only be described as an "earthy" feel. Maybe the Singletrack name has gotten to me after all. A few more sips and I came back down to earth, I would say caramel is what attributed to that earthy feel. I really did enjoy this one, all mountain bike bias aside, this is a great beer. I had it served extra cold which would help sway my thoughts to good. If this one was available here I would be after it every weekend.