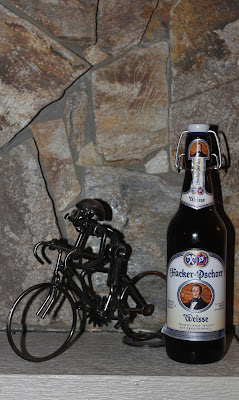 Doing some research while the pictures loaded and seeing that this brewery traces it's roots back to 1417 I nearly fell off my beer Friday testing chair! Instantly I was ashamed that I set up those douchebags "Ken & Barbie" all cute and cuddly next to it in the photo shoot. This is officially the oldest beer I have had the honour of reviewing. The brewery opened in Munich, Germany of course. The holiest of the holies when it comes to beer. The pinnacle of the beer world. You say Budweiser Clydesdale's, I say Oktoberfest. Two things that should never cross paths as the end result would only be good for the local glue factory.  To think of how long ago this beer dates just blows my mind, World War One happened and this beer was ancient! Shakespere lived and died during this beers reign! America wasn't even discovered yet! Wow, I am shocked at the sheer awesomeness of this all due to the age of this brewery.

The bottle comes with one of the best openers I have ever seen. Better known as the plop top beer bottle, once it is opened you can reseal this bottle of awesome. Although with all the promise leading up to this one I doubted very highly anyone would reseal a 500 ml bottle of Hacker-Pschorr. I did pour it and ended up spilling a small portion as the head rose up like that of a championship boxer rising form the mat and delivering a knock out blow. The four fingered head lingered long enough for the photo shoot which I did not include in this review as Barbie  and Ken are not worthy. I scabbed a picture from the internet, and what a picture indeed! The colour was a clouded golden amber that left me a little bit skeptical as to the taste. With the first and last few sips it was a journey in taste bud heaven. I've never had a wheat beer, or so I believe I haven't but this was one that was thoroughly enjoyed. A strange hint of banana and caramel seemed to tease my mouth while enjoying this one. Sadly it is gone now. If you see this, get it! If you can't find it. Get it! It is well worth the trouble of searching for. 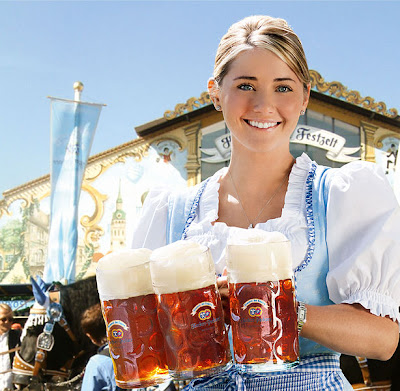