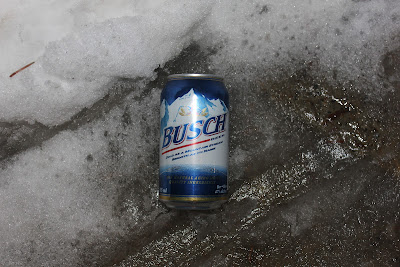 Teenagers and hillbilly's everywhere have just stood to attention and saluted once they saw what was being reviewed on the start of this Easter long weekend. Busch beer, a cheap runoff of Budweiser,
ironically like Busch series racing is a cheap runoff of Nascar... Oh dear! I mentioned Nascar and I just heard all the hillbilly's grunt and snort with pride.

Busch is another brand of the famed Anheuser-Busch empire. Anheuser-Busch is behind Budweiser. Nuff said... The beauty of Busch is it's an economy beer. Economy beers are pretty great, especially if you live in Canada where a twelve pack will cost around 24 dollars. A fifteen pack of Busch will set you back just under twenty and you get three extra beers (insert grunts and snorts here). Ladies and Gentlemen. That is value you just cannot beat!

The great thing about these kind of beers is they held on to that cheesy 80's beer theme and printed "cold as a mountain stream, smooth as its name" on the side. Now lets all stand back for a moment and just think about how incredibly awesome that is! Reading that as I downed mine made me feel so proud. That is proud, rugged, and manly! This beer is awesome, they have cold looking mountains on the side of the can as well. I really think the marketing that goes into this is pure genius.

The pour showed us a large three and a half fingered head which I blame on a bad pour. Shudder, a bad pour?  Well, I screwed up the pour but this isn't a beer that is meant to be poured. Most of these will be shotgunned or consumed quickly in their cans. The colour is very similar to Budweiser and a lot of the big North American brands. Golden and smooth like a cold crisp mountain stream (sorry, I couldn't help myself). The taste is quite watered done with real no discernible beer quality to give it that special something. Yet I say. How much did you pay kind sir, madam? There is a malt taste to it that helps it resemble beer. It will never in a million years compare to a fine craft brew but that is not it's intentions. This is cheap beer. Perfect for that weekend in the mountains after you spent too much on your bikes.