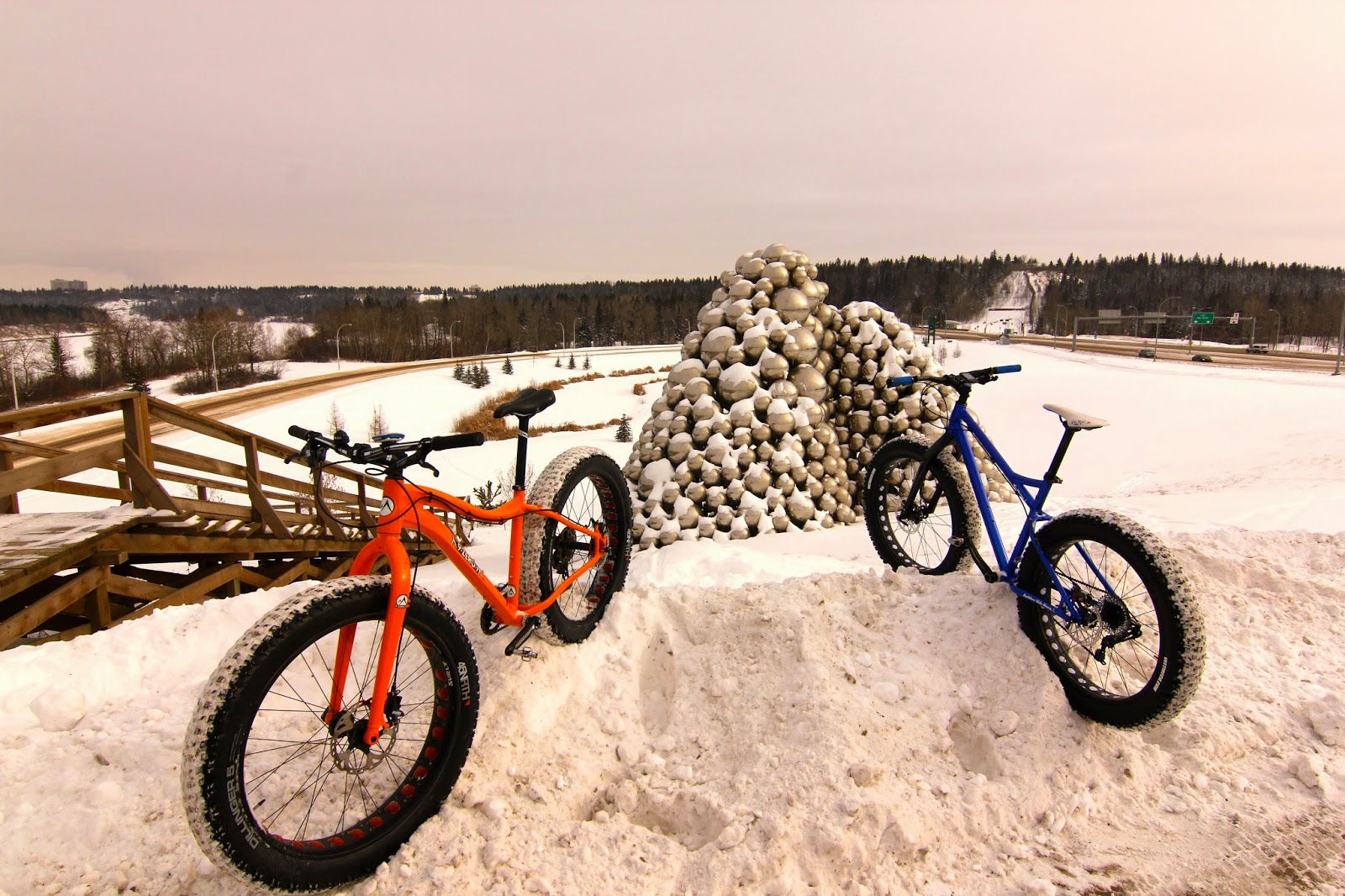 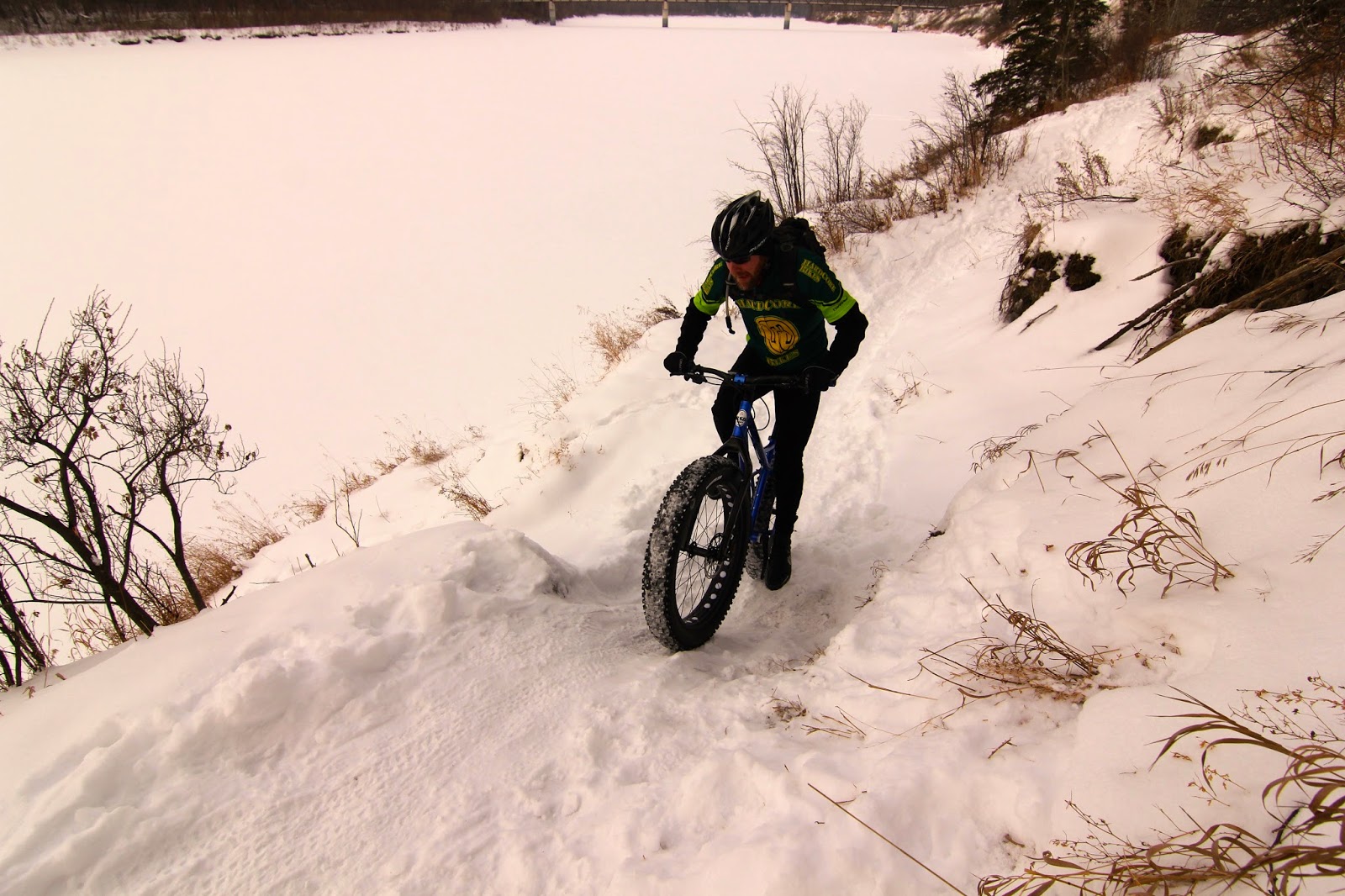 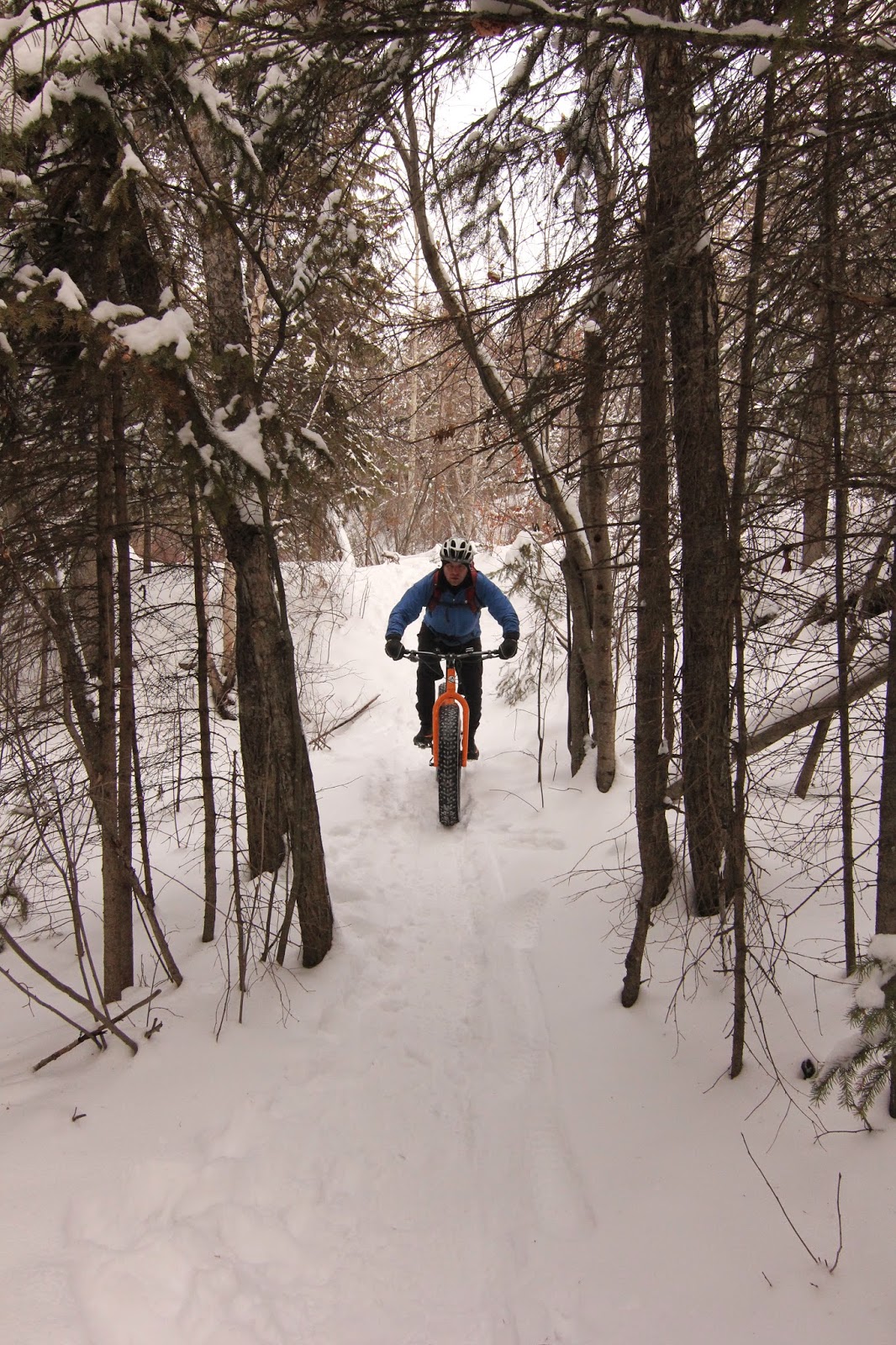 To end a busy three days of riding, I met Gord at Kinsmen park where we pointed our fine aluminum bikes West and told told them to "find us some goodness in an evil dark scary world." Well... I said that. Gord just kind of looked at me funny.

We found the goodness right away as we rode up into the hills to start this one off into the Kinsmen / university area. I know these trails do have several names, named by several different bike clubs but we will just stick with Kinsmen. The multi use was rideable so that is where we stayed.

Once we passed through Hawerlak and hit the singletrack heading towards Whitemud Park, the trails were all packed down. Not by fatbikes but by lots of walkers, we didn't see one fatbike track on the trail which struck us at being incredibly odd. Heading West on this trail is alot more challenging in the Winter and eventually my rear wheel kept spinning out on the climbs.

The white out conditions today played havoc on my ride. Riding without glasses is something I am quite used to now and Gord let me wear his Rudy Project glasses in Hawerlak. Holy shit! It has been over ten years since I wore nice glasses on the trail. Every trail feature was vivid in front of me. It was like bike riding in high definition television/ Imax.

Once the glasses were off I could not hold a proper line. Every fifth pedal stroke brought me off the trail to more frustration. Meanwhile Gord rode up ahead of me seeing clearly all smug in his fancy glasses. I have got to get me a pair of those...

We eventually hit Whitemud park where we took shelter in a shack named the Alfred H. Savage Centre. Perhaps the greatest warm up shack in the city of Edmonton. Why, this one comes with it's own city employee. A nice lady who rides bikes and had questions about moving up to a fatbike.

After the shack we could not warm up. We crossed Quesnell and I hoped things would get better but nope. The cold was settling in hard. We rode through Laurier where most of the dogs were quite well behaved. I was dreading the long climb out that I am used to when Gord took a left on the boardwalk and we rode up a long gradual climb in MacKenzie ravine. I honestly had no idea that existed. This opened up a whole new word to me for longer rides. I was told that the boardwalk turns into stairs and never bothered. More proof that you should explore every inch of the river valley.

The return home was exhausting. Between the cold and the tired legs. I was done. A beer was kindly had at Gord's at the end of yet another incredible weekend of bikes.