It's Been Too Long 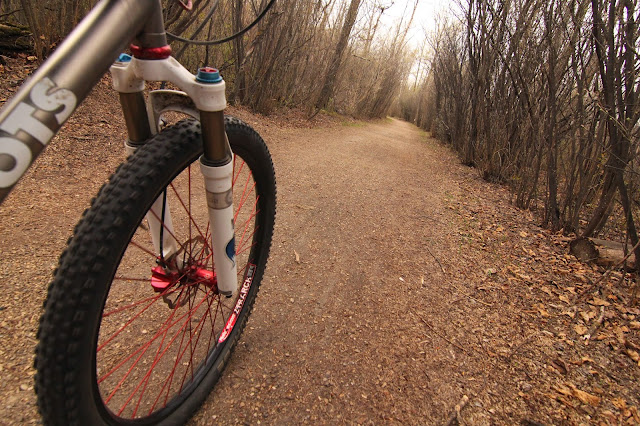 A return to the trails after another long stint up North. This trip up to Kearl lasted twenty seven days, all by choice as well as I had the option to come home earlier if I wanted. I guess the greed outweighed the desire to ride. Knowing this is all for the family it helps make me feel better.

This was the first ride of the year for the Moots which meant it was bound to be a classic, and classic it was. The ride started at Old Timers Cabin and instantly a lonebiker ride classic was born. The bike lurched ahead with each pedal stroke like it always has with the same fiery and vigor it always had. I dropped into the high point on West Coast Trail and instantaneously the bike became alive. "How does it do this after sitting dormant for six months?" I wondered. I hit Gnome trail, lower Kinseman, and thought about turning around at Groat Road Bridge but kept going.

I kept going to my beloved Talus Dome (picture accidentally erased), crossed Quesnell and returned through Laurier where a climb out on the hard side of the Laurier exit with a Mackinnon reward.

The Mackinnon ravine riding was stellar to say the least. A couple missteps were had and allowed as this was the first ride in just about a month. I would like to say I wowed a couple at the end where the extra steep steeps exist. They stood and watched me as I approached. I just about stopped but said "screw it, if I crash they have a good story to tell at dinner." The guy stepped back, I winked at his woman and rode it like a champ. I swear I heard her say under her breath "wow, so that's what a real man looks like" but quickly dismissed it as remaining oilfield loneliness camp thoughts.

The ride ended after a trip through Skyline trail. In the end the morning to early afternoon ride was much needed given the time away from the bikes.

Bikes fucking rule. I think you know that already.