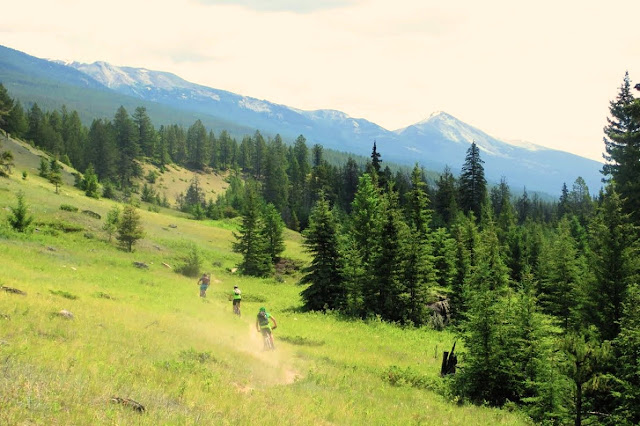 Jasper, home of tourists, hotels, gift shops that all sell the exact same thing, and some pretty shitty smelling fast food, but best of all. World class mountain biking.

The trip was made today as I drove out with Kent and we met Jason, Gord, and Keith (bloody awesome mountain bike leg. 'Bit by the Rocky') for a trip from Old Fort Point to Wabasso Lake. So I guess the title of this shouldn't be Five Lakes but six. But I won't tell anyone if you won't.

We started in the recreation centre parking lot and rode the mean streets of Jasper backwards on some one ways (lead by me) just so we could salute Freewheel Cycle. The bike shop that got me into mountain biking. Well, I saluted and am only guessing nobody else did. Although the group did have direct orders! 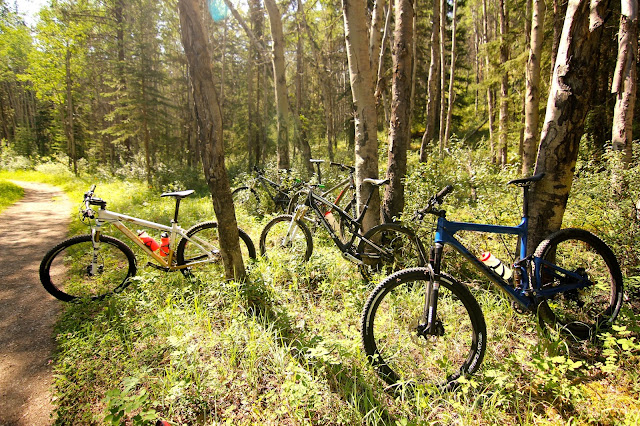 We eventually entered the trail head after Jason had some GPS trouble. Sadly it never righted itself and his GPS did not record an epic day of riding. Damn you technology! This would have been great to map out.

The ride started fine as the initial hills were climbed but slowly I felt worse and worse as we rolled on. Is this the curse of the mountains striking again? I have had consistent bad luck with my body rebelling out in bike heaven. A part of the problem is waking up at 2 or 3 in the morning anxious and wanting to get going. That seems to happen on every trip. 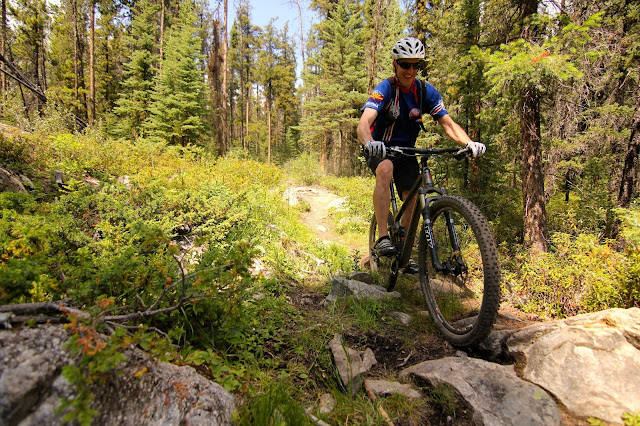 I sucked it up and forged ahead and was met with great riding. As per the usual Valley of the Five Lake menu. Slowly I climbed each hill in the granny whilst the others waited for me up top. Not a big deal as this is truly a top notch bunch of guys to go riding in the mountains with. They came for the experience, and not the competition.

I was impressed watching Keith descend the bad ass and deadly rocky descents as he would launch himself off rocks with reckless abandon.  With legs bleeding in true epic fashion (yet again) and  giant smile to top it off pretty much the whole time. This guy is a mountain biker through and through. 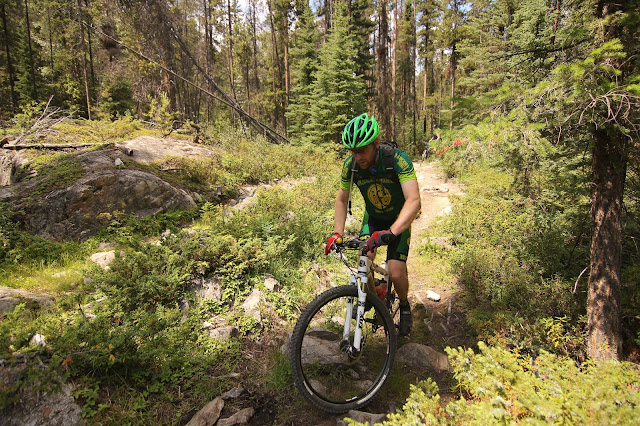 All four of the guys I was with today were impressive. I felt a bit bad as I was holding up the group but they we're a bit concerned for my safety and Kent being the solid guy that he is, stayed behind me after I told the rest of the group to go ahead. Things were starting to spin and I knew dehydration and hunger were getting to me badly. Not very cool when in the backcountry.

When in the actual Five Lake trail we were met with swarms of tourists. It is the high season, the weather was hot so it was busy. That did make for fun moments as people applauded and cheered as we rode the trails passing by them. I could see to the outsider that the thought of riding a bike on these trails would seem a bit impossible. Normal people do not understand mountain bike trails. They really don't. 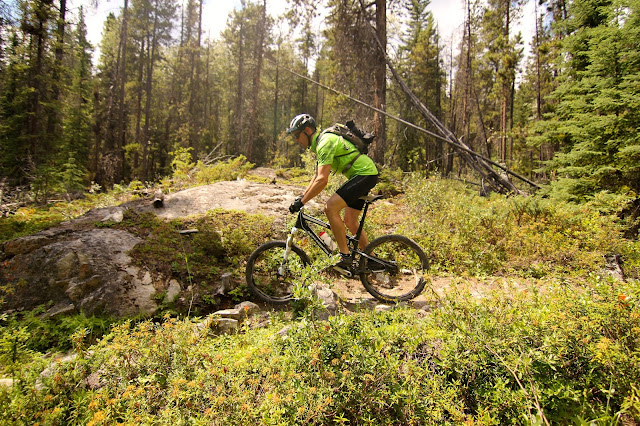 Lunch was had after a very hot and dusty ride to Wabasso lake. I dunked my head and Kent dunked his body. By that time I was spent trying to catch Jason on the trail to Wabasso. If you haven't ridden with Jason be warned. He is a powerhouse and can move that bike at insane speeds.

We rode to the highway after lunch where the thought of taking the highway back to town entered my feeble bodied mind. I pushed the thoughts aside thinking "silly boy" and rode on. Climb after climb ensued and I felt worse.

Gord had a crash in a very difficult rock garden and like a man high on bath salts. He got on his bike and tried it again. And then again. It was awesome. I love mountain bikes. 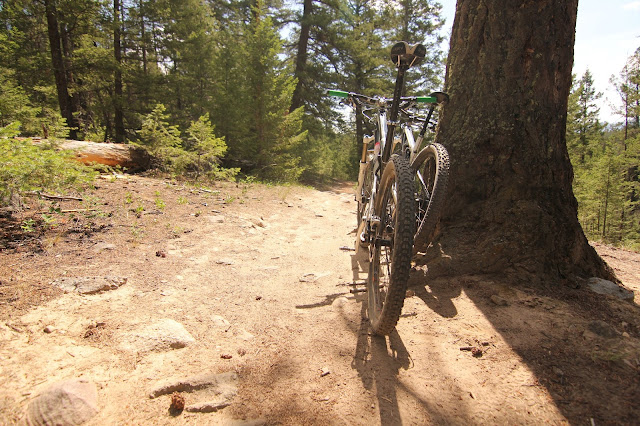 Once we got to the highway to turn around and return to Old Fort Point I knew I was done. I was having a hard time focusing on the trail. Each line I tried picking turned into shit and I would stub out on a rock. I want to blame the heat but don't really know what was wrong.

I made the decision to ride the highway home. Looking back I think it was a bad decision. The highway ride was terrible. Heavy, heavy wind and suv's and campers creeping up behind me made me very miserable putting a damper on an otherwise awesome day. The entire time I could not comprehend why people ride road bikes. Yes, I was on a heavy all mountain trail bike so I do get the difference in riding but still...

Why would you choose that over trails? 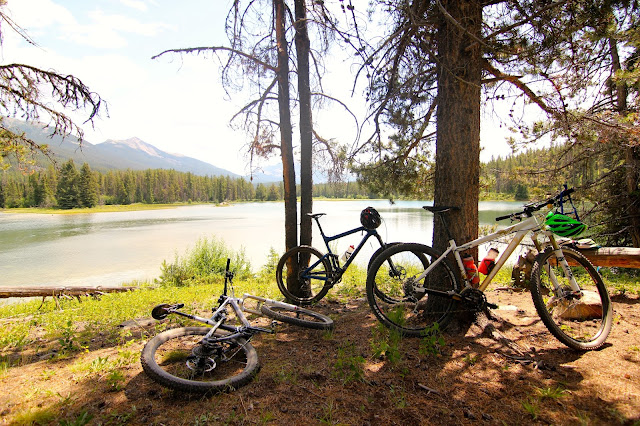 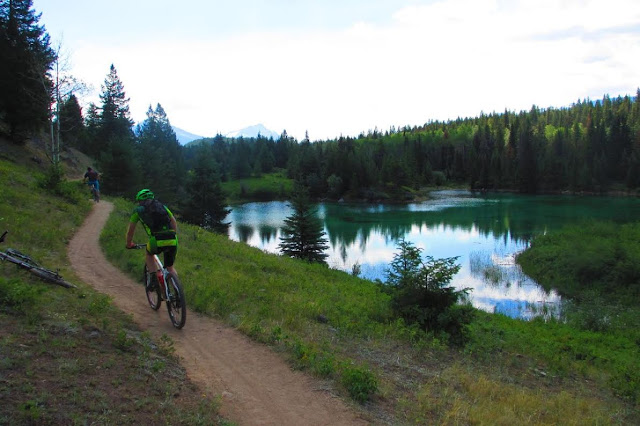 I got a text from the group saying "just waiting on EVAC for Jason.... Big wipeout." My heart sank a little. 'EVAC.' That sounds pretty serious!

In the end, not a big deal, some confusion on the texting which happens lots between me and my wife.

The group returned safely and the ride was over. If only I took the trail back. My gut feeling was telling me otherwise. Probably a good decision.