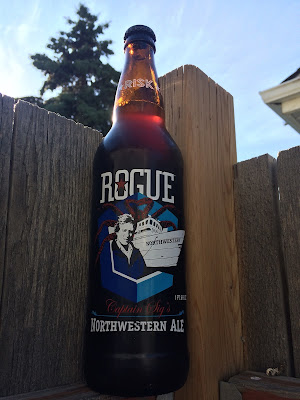 How can one celebrate Friday when he hasn't worked in two weeks? This one is strongly rewarded as I just did a test for new certification for my line of work today. I have been training for this test this week, hence the lack of rides. Well... That may look strange to some but on my days off  I have been getting in a minimum of five a week. So far this week there have only been two. Gasp!

Rogue beer has been around since nineteen eighty eight. You know. The time the Oilers were killing everybody in the National Hockey League.  This brewery has always been one to have pretty cool and exciting looking beers. From their Voodoo Donut Bacon Maple Ale to their Beard Beer. This is one of the leaders in the cool craft beer world as far as being innovative and exciting. Located in Ashand, Oregon. I can see why this brewery is cool like the Fonz.

Oh, Captain Sig. I remember watching this guy in the somewhat early days of reality television. This was actually a pretty good show set on crab fishing boats in Alaska. The made up drama was unfortunately there but I remember people dying and thinking "holy shit! Reality tv is much bigger than Survivor." but soon lost interest once all the bullshit made by people in suits entered. Captain Sig was a captain on one of the boats (ya, no shit.) He is somewhat of a hero in the Pacific Northwest. The best part of America in my opinion, and that has no Seahawk bias in there whatsoever. No seriously. Stop looking at me like that.

You still here with that upturned eyebrow?

The PNA is awesome! I mean, come on! Don't you watch Portlandia?

The pour. Let's just sit down and talk about the pour shall we? Tonight it was a miracle the Police or by law officers did not show up. The excitement... Well screaming from the intrerns, the pourer, the beer wenches all the way up to the executives and even myself was a bit over the top. This beer pour made lonebiker beer reviewing history. Words cannot capture the moment, but try to imagine 100 nuclear explosions and 10,000 laser horned unicorns coming in from the Heavens. That was kind of what it felt like in lonebiker headquarters this evening. A dirty, rusty slut of a beer sat in it's glass adorned with a good three and a quartered fingered head looking at us with a devilish look in it's eyes saying 'Drink me.'

So we drank and savored it's riches. It had strong traces of an India Pale Ale but yet had more to offer a thirsty beer drinker on a hot July day. If only a fine steak was to accompany it? Oh dear God, that is what this one needs. As each sip went down I had different thoughts of tastes that went through my little head. First; This was a full on IPA. Second; This was an IPA with traces of Red beer in the background. Third; This was an IPA with addition of sourdough and that old friend 'bitterness,' well that goes along with IPA's so I guess we are done here. 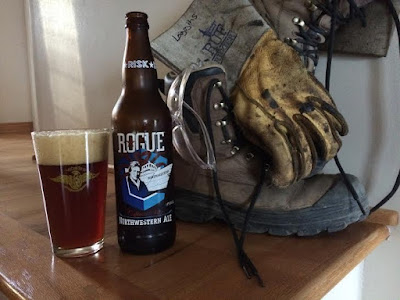