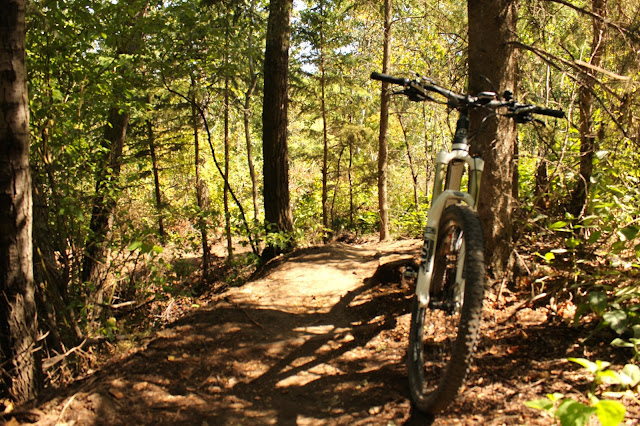 A very hot day which pretty much clears out the valley of trail users which opened things up for a ride through Edmonton's valley.

Not going to lie. The heat did get to me as I was out in prime hours. I took the camelback and plenty of water which I ended up filling up after draining it with head dunks and power drinks. Some may call me crazy for going but I took all the precautions. Plenty of breaks in the shade and as I said. A shitload of water.

The ride from Mill Creeks old parking spot to the mouth of Cambodia via Gold Digger where the decision was made to turn around due to the high heat was one where I named my new riding style as of late. The acronym L.P.S.B.F.O has been dubbed after today and the trip to Bragg Creek where extreme humiliation occurred. L.P.S.B.F.O which stands for 'Lowest Possible Speed Before Falling Over.' This new style of riding was practiced well today.

The ride was fine up until I got out of mid Ewok and climbed up to Caddyshack. Is it the hot weather? Honestly don't know as the pre ride diet was pretty well planned out. Once in Caddyshack the legs turned into two sacks of flour which was very similar to the Bragg Creek situation and I slowed down to L.P.S.B.F.O gear.

It bugged me but I was alone so thankfully I didn't have a big group waiting for me at every intersection. That is pretty much the worst.

In the end, not a lot of activity in the valley, a bus fire entertained me after Mill Creek and oddly I never pulled out the camera. The only epicentre of people was the pool in Mill Creek which was filled with high school kids and Mom's with babies and little kids all screaming.