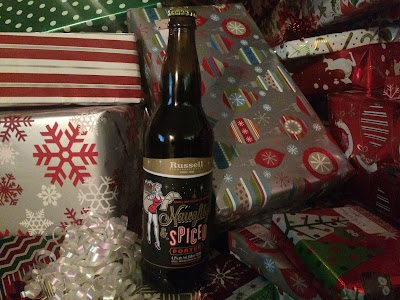 Coming at you again from lonebiker headquarters on a beautiful frigid Christmas Eve. The decision was made to do another review as the reviews have been lagging as of late. A trip to Edmonton's holiest beer sanctuary this morning: Sherbrooke Liquor store brought home six fine looking beers which I hope all get reviewed this holiday period.

If it doesn't happen you can expect mass firings across the board. I don't care if it's Christmas.

The beer tonight is a porter from a great province next door to our great province. British Columbia. In Surrey to be exact. Established in nineteen ninety five. Russell brewery went public in two thousand and five and shares it's name with the greatest quarterback in the NFL. Russell Wilson. No sir, no bias there. I speak the truth.

19 touchdowns and no pics in the last 5 games. I'll just leave that there...

Naughty and Spiced is their Christmas seasonal offering. A dark porter spiked with nutmeg, cinnamon, and ginger. A very popular one that is sold out at most places so if this one is the winner it promises to be. I bid you good luck sirs and madams on your search.

The pour was incredible and indubiously entertaining. We knew this was going to kick some ass and it did. A short and proud one and a half fingered head took charge on top of a dark Christmas porter. Close to the time Santa will be making his way over to lonebiker headquarters. Could the drama be any more intense? A few interns passed out from the drama and I kindly let them leave early (the firing notices were mailed promptly).

It tasted of all it offered. The special part was bringing it up to my nose and smelling the sweet Christmas aroma eminating from the glass. It was all there, in short it was like having the three wisemen visit and bring gifts with every sniff. I mean that would be awesome now would it? The taste was all that of a true Christmas porter. If there is such a thing. It gave me unfiltered Tim Hortons coffee luckily saved by spiced nutmeg and a sprinkle of cinnamon. The lacing on the glass could only resemble nice lingere on a great Christmas eve. 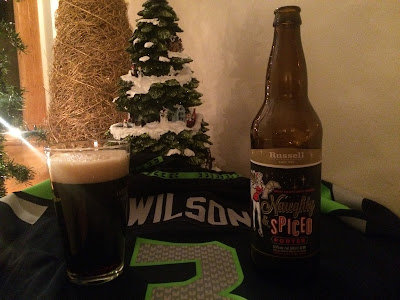