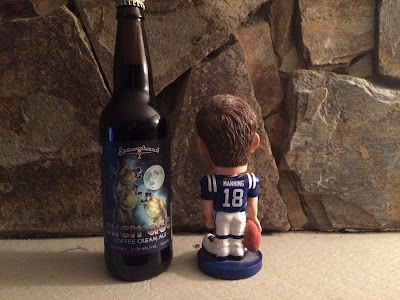 On a rather somber Friday evening as we head into the weekend bike-ride-less and will be bike-ride-less for the foreseeable future. A herniated disc in my back has put a serious halt to any rides. I was manly (or stupid) enough to go into work for the week so this here Friday night beer review is well warranted. In fact it was so well warranted we almost did a Beer Friday doubleheader Spectacular!

Management shut that idea down at the last minute.

Tonights beer seems just randy enough to do on its own and not to share the spotlight with another brew. The label alone on Arrowheads Coffee Cream Ale should stand alone tonight rightfully given it's awesome looking label.

Arrowhead Brewery which started in the year of our Lord Two Thousand and Twelve in the beautiful town of Invermere, British Columbia. A great town that has it all. Riding, riding, and more riding, a kick-ass lake, a mountain resort, lots of yuppies to make fun of and throw things at whilst in town, and trains! Yes trains! (I was maniacally laughing while typing that train part).

The excitement was growing with astonishing fever in the beer testing lab. The entire Lonebiker staff had come to watch the pour that was about to take place.

The pour showed a dark angry looking stout that you would think would knife it's own brother in the back over a game of Monopoly. Yet, it regularly takes care of it's Grandma by buying groceries and taking her to the bank. Why sirs and ladies. This beer is a real sweetheart!

The first sip was something we expected from a company like Arrowhead. They take unreal pride in their brewery from the website right down to the labeling. A good presence of coffee, but good coffee you would get in an out of the way coffee shop in a back alley, although this pot may have been left on the burner too long. But that's ok. A hint of caramel comes by to help sweeten the palate making you almost regret swallowing it.

Yes, there are lots of beers out now just like this. You could be a douchebag and say way too many breweries are doing this now but that would only make you a douchebag.

These current craft beer times are quite the thing going. Let's hope it doesn't stop. 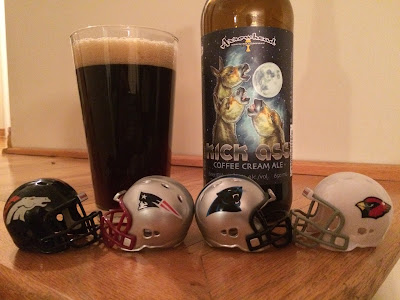