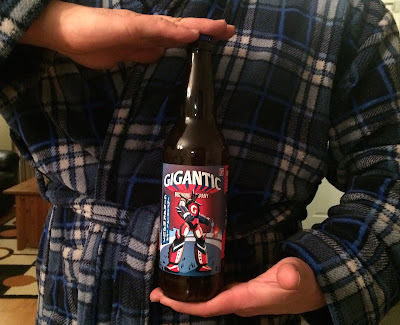 The first Beer Friday of the year after a full work week. Life has returned to normal and Christmas is now...  Well, quite behind. That's right. Time to live like normal people. The days of walking around in my housecoat ordering around my interns to fetch me slippers and a tea on a lazy Tuesday afternoon are long gone.

The first week back to work was a bit of a disappointment as not one after work ride happened. I came close but the bike never even made it to the sweet confines of the Jeep interior to only sit and patiently wait for me to finish work and take it to the Holy land. Here I sit and hope next week the after work rides will come to fruition. I know if this was the middle of Summer it would be no problem. The challenges of Winter make things a lot harder to get done.

Gigantic Brewing, located in Portland, Oregon, aka hipster paradise. A company much saturated in craft beer culture. A look on their website which has custom beer labels for sale done up by (I'm assuming) Portland artists. The brewery has of course a tap room and champagne lounge. Their television rules in the tap room are pretty awesome, no television is on in the bar unless there is a soccer match on. They want people to socialize and not be mindless drones staring at television screens. They don't allow NFL games to be broadcast, so that's kind of a bummer.

The pour gave us a murky looking beer with all the attributes of a true India Pale Ale. A good three fingered crown sat on top with promises of lacing coming down the glass in an edifice of overwhelming expectations. The beer showered the beer tasting lab with smells of citrus, a touch of pine, ginger all mixed together for one incredible smell combustion.

The tasting was what an IPA who grew up in a rough neighbourhood beaten by his siblings daily and fighting for his Mom for food and having to beat his deadbeat Dad weekly would give us. That's one tough son of a bitch kids! A strong slap in the face on each sip. This is an IPA with balls bigger than that guy who stood in front of the tanks in Tien Men Square. Oddly not over bitter with this big of an 8.8% punch. This citrusy IPA is not all that bitter either like some IPA's. This one is a winner.

And that lacing left on the glass... Damn.. Like fine lingerie strewn about on the floor. 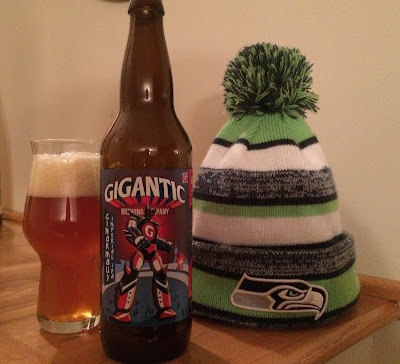