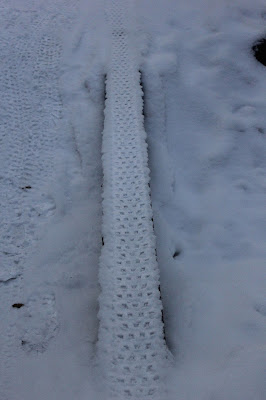 A ride in the very late morning which turned into the afternoon quite quickly with Jason on a cold day where the trails showed their true grit laced with fresh snow and Canadian awesomeness.

The ride started at a very fast pace as Jason led the charge like a maniacal Lance Armstrong after a fresh shot of human growth hormone. I followed as close as I could until I lost it in the hills of upper Northern Mill Creek  where I had to stop and check "my shit" as "my shit" was all turned upside down. I was afraid I was going to have an out of body experience meaning I would die and rise up away looking at my corpse wondering how awkward this will be for Jason when he comes back and realised he had just killed me.

The pace slowed down and we hit Ewok Forest and rode the mid trails. The incredible scenery laced with incredible trails was.... Can you guess? Incredible.

After the mid section we rode to the top and rode the high trails. At that time I was finished. Could it be the first week of work that finally did me in? Or that combined with being a little bitch? I kind of think the latter.

The ride ended with me limping home behind an overenthusiastic Jason who clearly needed more to ride today.