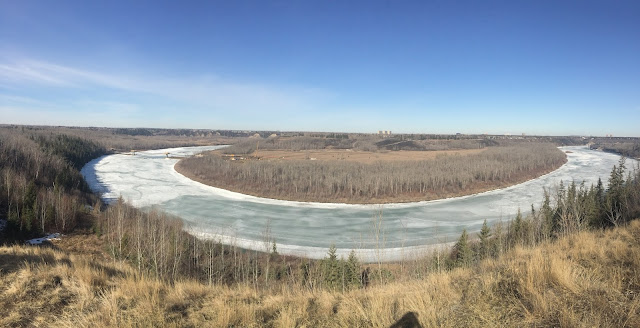 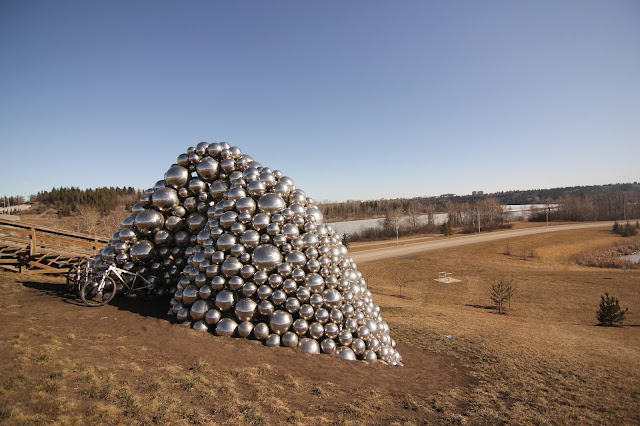 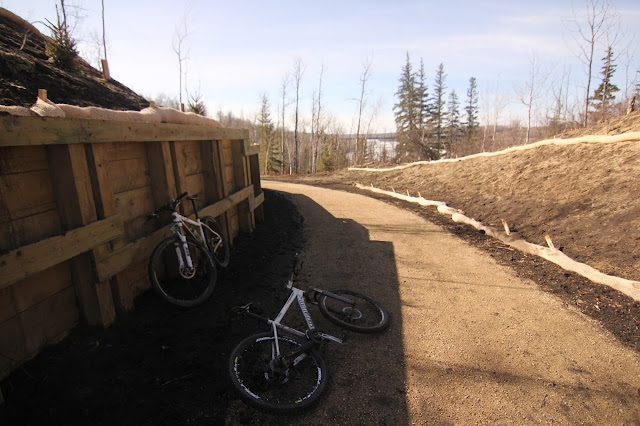 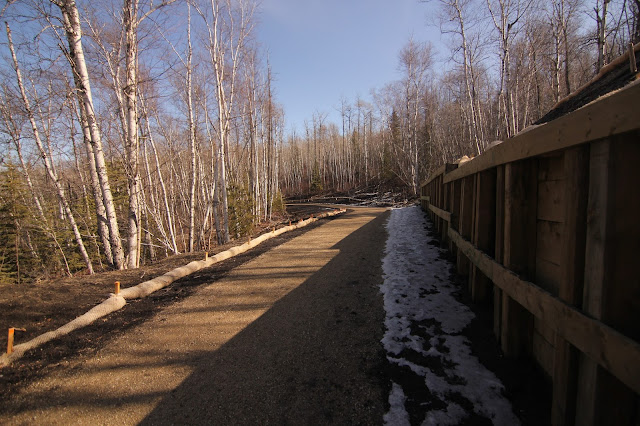 The second meet-up with Gord for the second day in a row and I can only think of how lucky of a guy he is! Two days of riding with the lonebiker! Goodness Gracious! What a lucky duck!

It turns out we were both lucky as the combined effort of challenging each other to keep going made for one of the better rides of the year thus far.

The ride was a very typical March melting snow, so the trails are complete shit, so stay on the pavement type of ride, so don't ride soupy singletrack and kill it. There was some singletrack testing in the morning and we learned that choppy ice and 40 lb PSI inflated tires are kind of a bad mix.

We started at Old Timers Cabin and the plan was to hit that new Terwillegar multi use that we found so swanky. We took it very easy and avoided as many hills as we could, Gord passed Santa Claus and before we knew it we were on the entrance to Terwillegar.

Pavement is fast, and Santa's a roadie. Wise lesson's learned.

The descent into Terwillegar was surprisingly terrible. Heavy ice and snow plagued the trails making the descent rather hellish. We were soon on the new multi use and grinned from earlobe to earlobe as we cruised down the great brand new double wide gravel.

Once on the paved again the decision was made to loop through the city using the paved trails and bike lanes (insert laugh track here) to come back and around to Mill Creek. the thought of that Terwillegar ice infested climb out was enough to make me go lock myself in my basement and shave my head with a butterknife.

The ride in the city contained many special perks:

* My wipeout when going the wrong way and having Gord yell to turn around. I panicked and turned too quickly and the sound of aluminum hitting the concrete was the greatest thing I think I ever heard right at the busy intersection of 111st and 29 ave. I'm sure the people sitting in their cars enjoyed the carnage which unfolded right in front of them.

* An empty Costco parking lot as it was closed. We watched a guy park his car and walk towards the door and confusedly try to figure out what was wrong with the door as it would not open. You cannot make this stuff up. There are people that stupid out there.

* An unreal experience as the wind pushed us along the 91 st paved trails. No effort was put forth on the pedals and we were flying like a heavily injected Lance Armstrong. It was quite awesome.

Once we got into the glorious Mill Creek the amount of people had more than tripled as opposed to earlier. So we annoyingly avoided family after family and eventually climbed out and into the valley where we stopped on the doomed walking bridge and had one last coffee break.

The ride ended with a swing over to the LRT bridge where we crossed and finally killed our legs on the climb back to Old Timers.

We were close to fifty kilometres but did not care on hitting that mini milestone. We were done.

It was an awesome day.