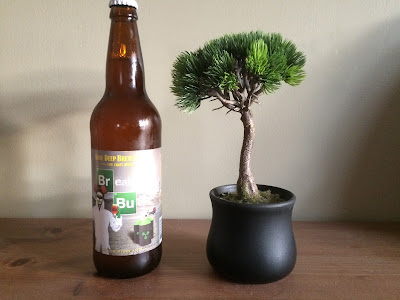 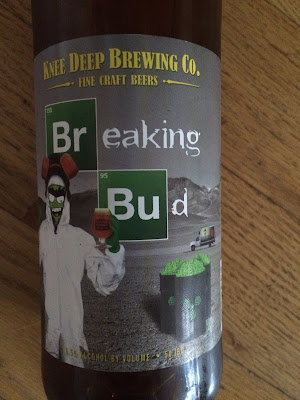 Welcome brethren to another fine instalment of Beer Friday. I worked all week and yet again did not get one ride in. The bike and gear did make it once but I was too much of a wimp to head out to the trails after work.

Please... Someone. Preferably a medical professional. Come check if I have balls still. Cause I'm pretty sure they are all but gone.

Finally a great looking craft brewery that isn't from British Columbia. I did threaten the beer purchaser with an immediate firing and for a strange reason, colon cleanse if he picked up another B.C brew.

Nothing against B.C. I'm just jealous is all...

Knee Deep Brewing Co. was founded in one of the greatest states in the U.S. of A in 2000 and 10. Nevada. Now they reside in Auburn, California. The home of a rather big college football team (so I'm told.)

Breaking Bud takes it's personality from the greatest television show in history. Breaking Bad. If you haven't seen this show. You sir/ madam should be ashamed and go stick your head in a sink and rinse yourself until you are all wrinkled of your poor television taste.

The pour had an explosion of drama as once this one was opened it started emanating from the top of the bottle. This bottle was possessed! Was it Walt possessing this bottle? Or... gulp.. The cousins!

I quickly hid under the table.

Giselle, the head beer pourer quickly sighed and told me it was because the bottle was roughly handled from cooler to the Pour pulpit.

Instantly I was enraged! Giselle has seen her last day as head beer pourer at lonebiker beer headquarters.

I waited until all her stuff was packed and she was out of site until we continued this potential winner,

The first sip was met with caution as I was scared the IPA sour Gods would be out in full force. This had that distinctive India Pale Ale scent which kept me on my guard. I sipped and was met with zero bitterness which made me happy.. Indubiously happy. Perhaps the easiest drinking IPA ever? This has my vote. Hints of white wine for some reason was in there. Tropical fruit that I could not discern also teased me. A very easy drinking IPA with sexy beer lingerie lacing chasing the glass for the entire sipping extravaganza. Wow! 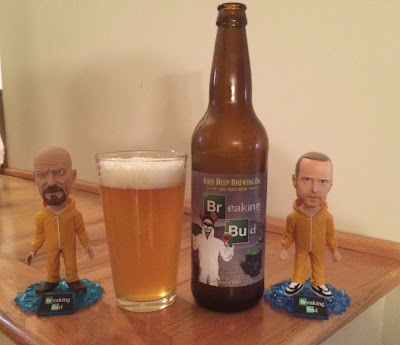