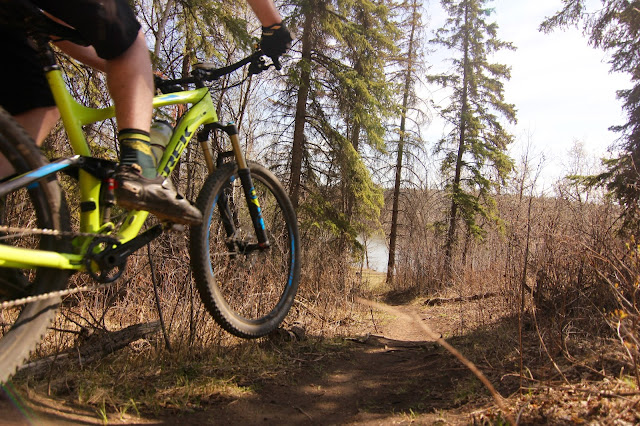 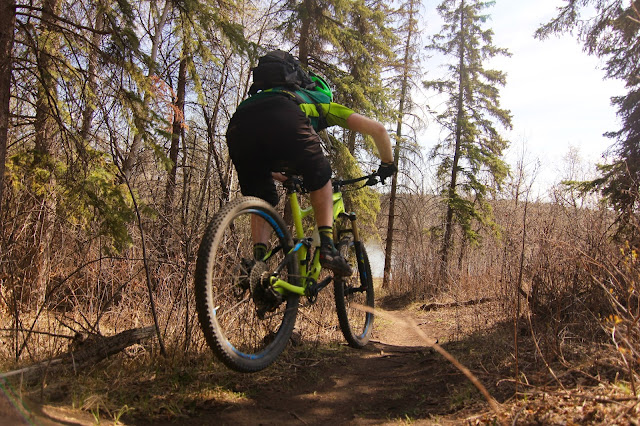 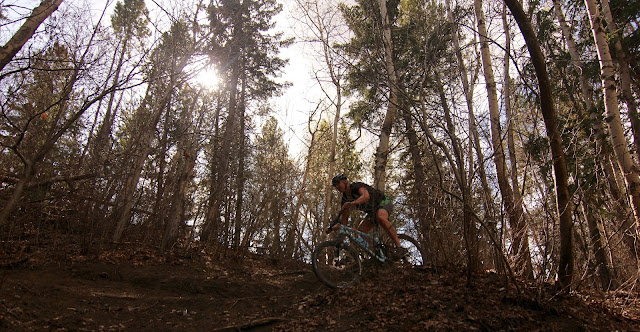 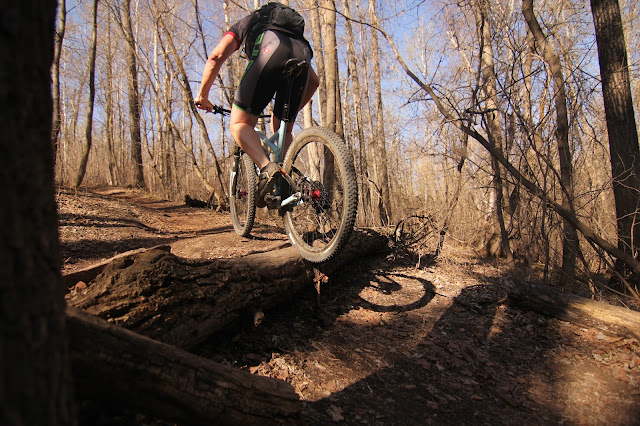 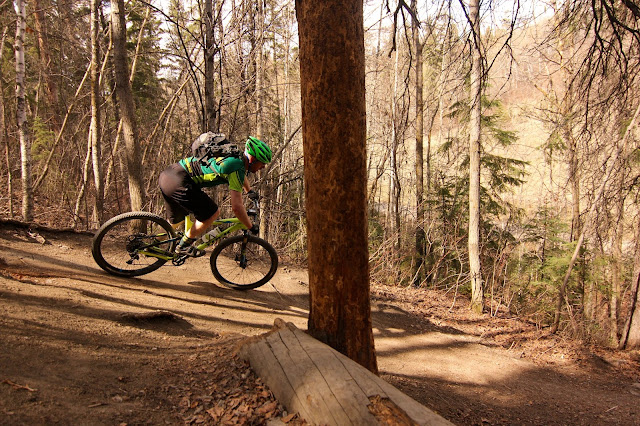 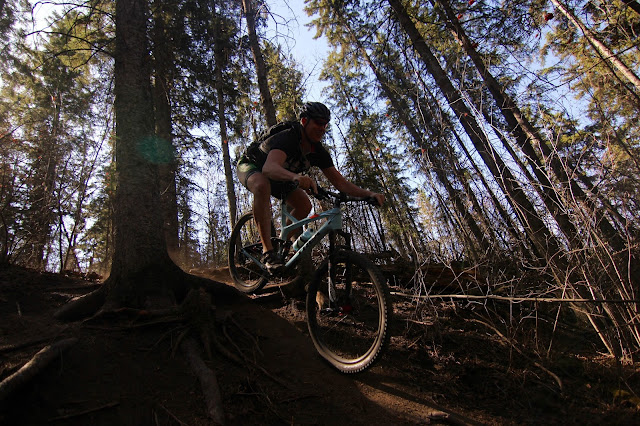 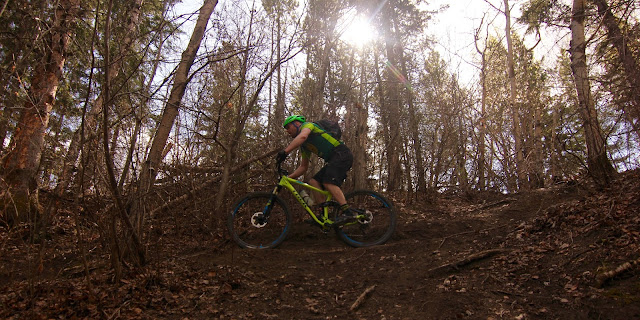 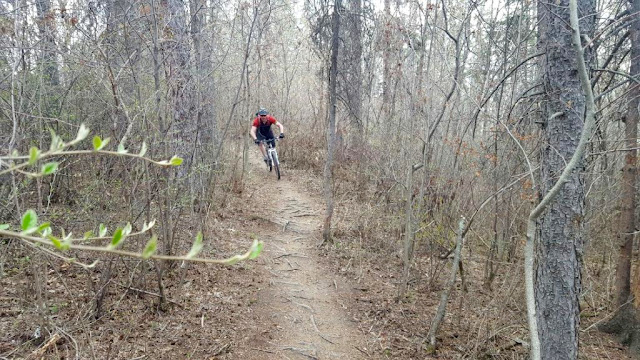 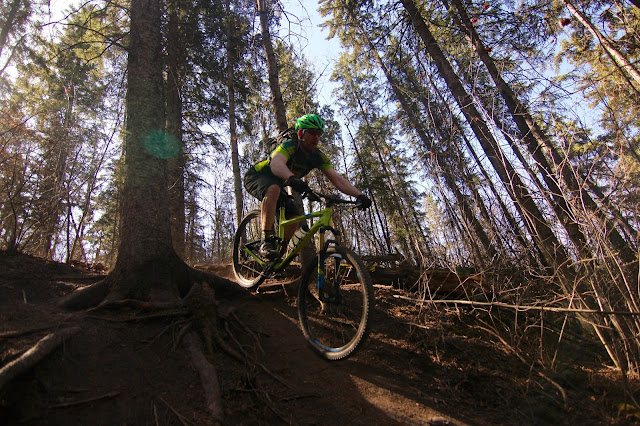 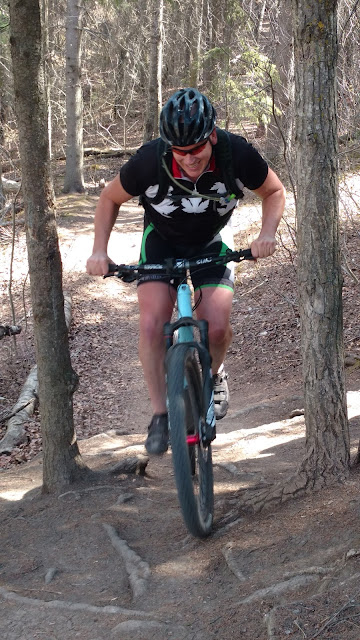 A meet up with Gord and Jason on a day that had tremendous potential. Why did this day have potential you ask?

Cause bikes. That's why dipshit.

Why do you ask such stupid questions?

The ride took place from Hardcore bikes. The kind folks at Hardcore were nice enough to loan me a brake as my front brake was I can only imagine sabatoged from a rival Edmonton bike blog. There is quite the turf war going on between all us local bike bloggers. You folks just never mind. This is some pretty serious stuff.

Naturally when you go with a couple of Hardcore's group ride leaders your cherry will be popped on some new trails that you never knew existed. After riding in the river valley for over twenty years I am dumbfounded when finding more and more of the incredible that we have in the valley. Seriously kids. Our river valley is a mountain bike Mecca and we take it for granted.

Gord and Jason both met me with giant smiles on their new Trek Fuels. Sadly Gords was bought late last summer and I never got to ride with him. Jason's is still brand new. Both bikes were quite sexy and it made me quite jealous. A replacement for the Altitude should be in the works soon.

On with the cherry popping...

The ride started as we dipped into Dirty Mattress and rode West Coast Trail. It was a very fast paced start to the ride and we slowed it down. The first cherry popper was Masters Degree. A trail that requires extreme fitness and some mammoth sized testicles. Very steep and aggressive climbs mixed with switchbacks and sketchy ass ladder bridge crossings best describe this one. Don't ride this trail if you are leary of steep drops and sketchy ass puckering exposure. My first impression wasn't the greatest but after much deliberation and rehashing in my head. I realized I'm just being a bitch. I'll be back to Masters Degree. I'll just make a stop at the brass ball store first.

Six Shooter was then ridden up and they showed me where the other entrance to Machete was. Again my cherry was popped and I was quite appeased with what I was riding. A steep downhill which featured a fun ass puckering ladder bridge. Soft loamy corners added the sketch factor. This side of Machete was a lot more fun and a tad less sketchy than what I was riding before.

More climbing and descending was had. Eventually a Talus Dome photo opp took place and we were on the road to to see the progress on the new foot bridge via Oliskew. Patricia ravine was entered and another trail was ridden that I knew existed but didn't know the exact location. Wolf Willow led by Jason who attacked the first long deadly climb like a mental patient high on bath salts. Gord followed and did much of the same and made that hill his new bitch. Tail tucked and I followed them up in the granniest of granny gears knowing they just rode up with a 30 tooth and 32 tooth front ring.

Wolf Willow was hit hard. Small power climbs carpet bombed with roots had beaten the living shit out of me and my poor hardtail. This was a  much better way of getting out if Patricia as opposed to the lame multi use down below.

Root after root attacked me and soon the boys were out of site on their fancy Treks. I hit another power climb laced with roots and collapsed and cried out to the bike Gods "kill me! Just kill me right now! I don't care if you send me to hell! It will be much better than this misery I'm experiencing!"

I got up composed and rode on. Eventually we were out and ended up at the zoo for a water refill. What a strange place to fill up. An army of mini van warriors surrounded us and we eventually got the hell out of there.

Mackinnon was ridden and enjoyed. How could it not be!? My energy levels were sapped and we made our way home.

The ride ended after a retreat by myself out of West Coast. Jason and Gord rode it because they are men.