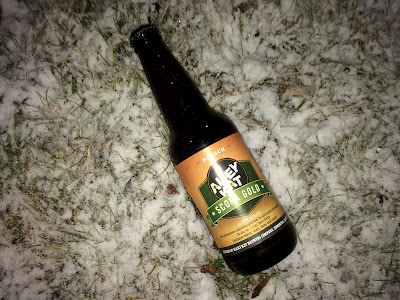 On this. My Friday we bring you Scona Gold from Edmonton's own Alley Kat brewing on a very hopeful night as fresh snow seems to be fluttering down which could hopefully be an end to this bullshit weather we have been having. Albeit, I like the warm weather but the rain that accompanied it has been a singletrack killer now for over three months. OK, three months is a bit of an exaggeration but it feels worse than that.

Alley Kat is the pride of Edmonton's beer market. A craft beer staple since Nineteen Ninety Five and is situated in a somewhat peculiar location on the south side of Edmonton. One of these days myself and the lonebiker beer review team are marching down there and demanding a free tour with free tour beer and loads of free merch.

You listening to this Alley Kat? I know you read this!

This Kolsch beer which originated in Germany (where else?) won Gold at the thirteenth annual Canadian brewery awards in Two-Fifteen. Do any of the other Canadian cities have a chance when it comes to Absolute awesome? I mean, the Oilers and all those Stanley Cups. The Eskimos! I lost count of their championships!  With Alley Kat brewing topping the awesome with their 2015 beer win I would see why all other Canadian cities would feel inferior next to us.

The pour gave a nice looking wheat ale. I'd say it was neat, tight and polished just the way it's German originators would have wanted. The German way. The taste is a tad fruity with green grape and slight wafts of cinnamon. A very easy drinking Kolsch that wasn't hoppy. A definite sit on the patio beer, or seeing as it's November. A sit on the couch after riding in the muck and watch football beer.

This one is pretty great. 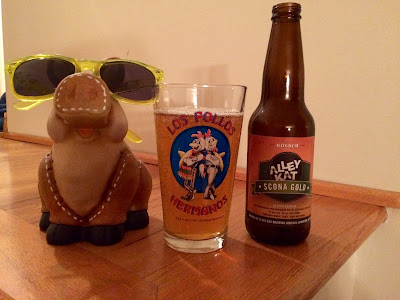