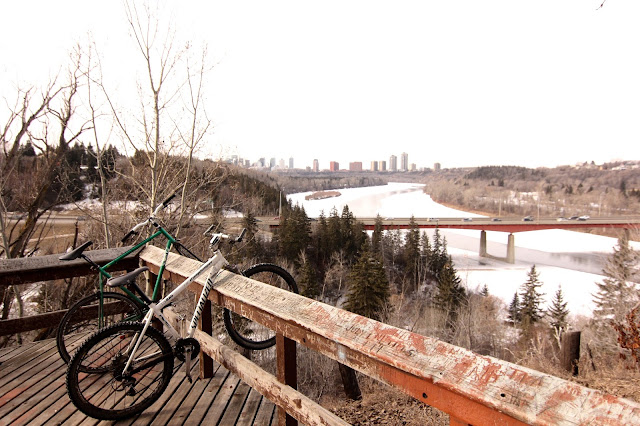 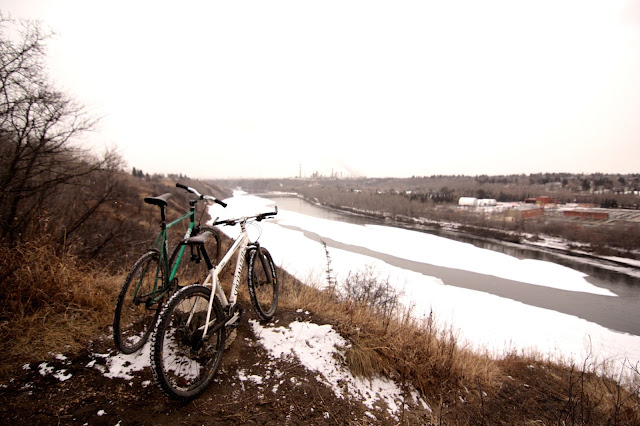 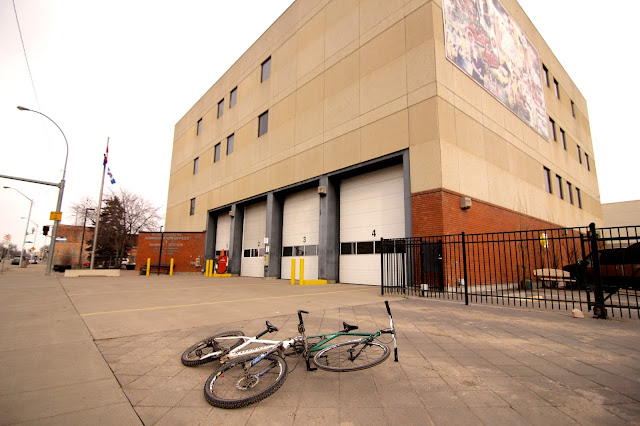 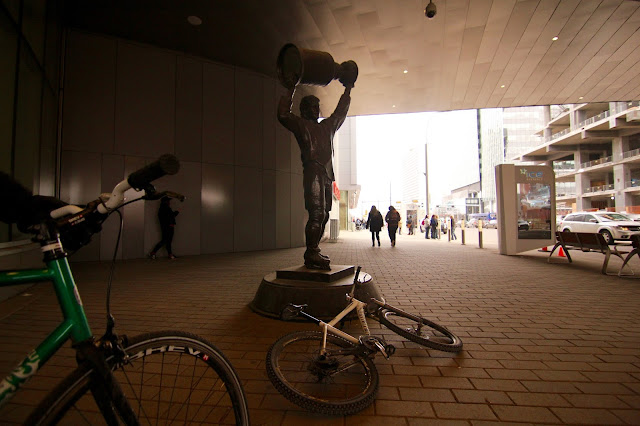 Once I saw Kent get out of his car I couldn't hold it together. "Wow! that hair! How do you do it?" He rolled his eyes and quietly pulled his bike out of the car.

A meet up with Kent on a proper Saturday done right. A ride from the Science Park to the High Level  on the majority of the south side of the valley. The ice showed its fury as we descended towards the bridge connecting the Science Park to Rundle. Ice pockets from previous slush spots attacked our unstudded tires but we surprisingly held our lines cause we are true champs.

The highlight of the day was watching Kent climb up to Forest Heights on the steep ascent paved path of death. I hung back and was in awe as he went back and forth on the trail to stay upright and still made slow but forward progression. It truly is the reason I will never own a single speed. I have seen other single speeders look miserable as they climb up that hill over the years. Kent just smiles and looks happy. I am starting to think he might be a bit of a psychotic.

But that's cool. He is fun to ride with, plus I get to look at his hair.

The valley as expected was quiet which is the way I like it. I can only assume word has spread about the icy conditions, although a good chunk of the paved on our trip to the High Level was open and good. Yet when we remarked on how good a section was it would turn shitty real fast. Than back to good.

So if you really want to get out there and ride, go. Just be aware as things get go from good to bad very quickly.

Once we crossed the High Level a break was had and we slipped into town and made our way to Rogers Place where denim jeans and homely ladies were running rampant. Oh dear God what was the deal?

Garth Brooks was the deal. We didn't hang out too long as the crowds were growing in large numbers. We escaped in the sketchy inner city and ended up on the paved along the LRT. Ada boulevard was ridden and soon we were back in the valley on the home stretch. It was good timing as my legs were completely done on the final climb out.

A great ride on a rather shit day.