A very quick and impromptu roll through the Science Park area to blow off some steam. Don't think I really got over 12 kilometres but don't really care as the ride was one hundred thousand times better than laying on the couch playing on an iPad.

With the rain starting to come down I pulled in and all the usual Science Park characters were there. It doesn't matter what time of year you go. There is always that middle aged dude in either a pick up truck or some sort of car that resembles a Ford Taurus just sitting in the parking lot and staring out the window.

Did he just finish a hike? Nope.

Is he meeting someone there? Nope.

Is he letting his dog run around? No dog present.

Did he just pull into the Science Park only to sit in his vehicle and stare out the window? Affirmative.

Just what the actual fuck are these guys doing? At the same time there are guys pulling in to the parking lot and leaving abruptly. Only to drive around the area looking for something. Was this place at one time a haven for prostitutes? I can almost see that being the creepy Science Park and all.

The whole area just has a weird vibe to it.

So naturally I got out right away and crossed the river into Rundle where I decided that Gold Digger should be attempted. I would see what the bike does, if it leaves tracks I would quickly turn around. It didn't and despite a few front wheel slips on the downhills things were pretty prime.

The rain came down harder and I went back via the paved trails. A quick snoop in the Science Park but left quickly after getting frustrated at the trails. 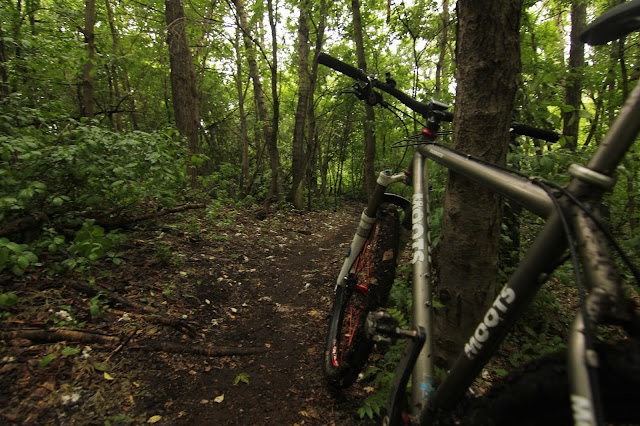