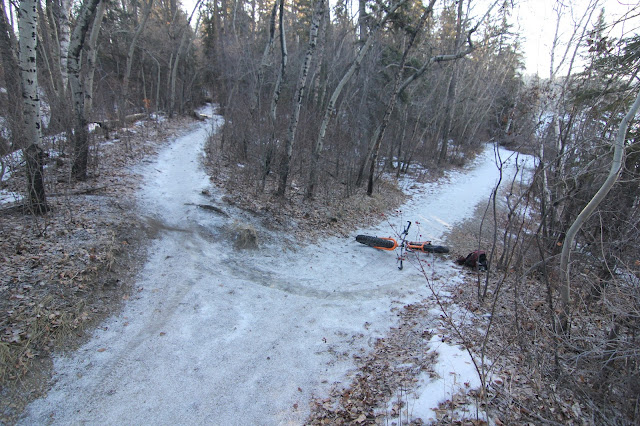 The above picture is a telling sign of how the start of this one went. After dropping in from Old Timers parking lot I wanted to hit the Old Timers singletrack after a rather rough longer than normal stint up north. You can see the tracks on the left leading off the multi use going to the singletrack and the dirt patch on the trail where my ass slammed into after hitting the unseen glare ice and then my unpreventable slide down the trail as I laughed uncontrollably.

It was a sad laughter my friends, as I knew what I was into.

These icy conditions have become an annual tradition. Truth be told I knew it would be bad in the valley after getting weather reports from Mrs lonebiker during my northerly voyage. Today I had half heartedly hoped it would be ok. Just ok is all I asked.

I retreated up to the paved paths as the multi use in the area looked pretty dicy. The valley is a mixture of extreme ice and bare dry pavement. It would seem anywhere there is snow cover there is ice unless they sprayed the trail down with sand to help mitigate the slipping.

Since this was the first ride back and yes, did I say I had some rather hellish nights? Nights that would turn the common office worker into a puddle of despair and tears.  I was almost there a few times but I've been in the business long enough that I know when to pull my shit together.

Hence the first ride would be short. I exited the valley on my first climb out of the new paved exit up to Saskatchewan Drive. A pleasant climb. The iced sections made it fun as my back end would slide out on each pedal stroke and find its line and keep going.

A High Level crossing happened and I was downtown, a place I did not want to be but kept going deeper and deeper all the while thinking why I wasn't on the shit bike. These conditions have zero reason to ride fat right now.

I found the valley again via Grierson Hill. I gave zero fucks about the funicular going up the hill as I passed below. I'm sure I'll care soon. For a bit anyways.

The ride ended back at Old Timers. Did I even get over ten kilometres? Meh... Who cares, I still  rode a bike today. 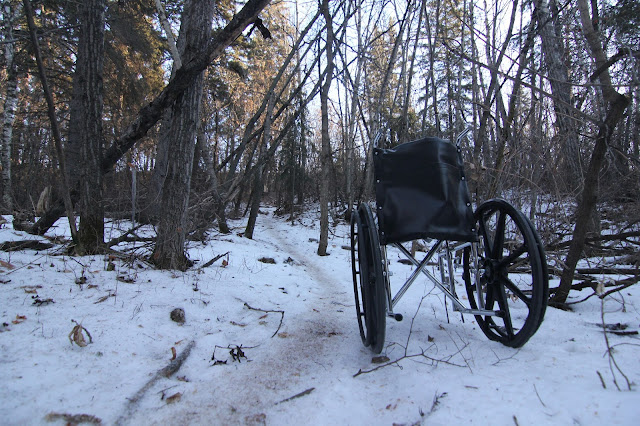