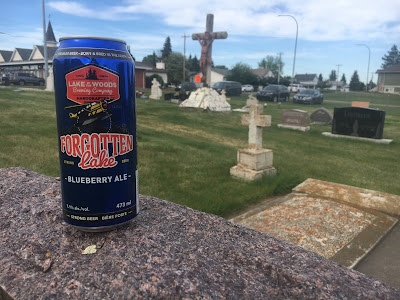 This stuff right here kids. The stuff of legends when working at the mine in the Lake of the Woods district. Well at least for our guys it was. At 7.1% it would tap you on the shoulder and perk you up. Then right after it would punch you straight in the chin where you would wake up several hours later with a terrible headache. Empty Blueberry cans everywhere.

I thought I did a Lake of the Woods brewers review on here before but between myself, the executives and some of the disheveled interns we cannot find it. I swear I remember writing about Kenora after looking it up online. Dammit! Those damn blueberries!

Well... Kenora. Where this brewery hails is one hell of an amazing town. After rolling through a few times for work after flying into Winnipeg I was officially sold on the cabin side of Ontario I used to always roll my eyes when hearing about cause I was a typical Albertan. "Ain't nuttin better than Berta! We got mountains bitches." I would often say.

Kenora doesn't need mountains. It has a whole lot of awesome in just about every corner. It reminds me of a very nice British Columbia resort town. The downside is the lack of riding which is clearly evident. The upside is the lakes. Hundreds of lakes interconnect laced with real cabins. Real cabins. Not houses put on a lake lot like you get in Berta. Cabins on islands and tons of fly in fishing kinda makes one wonder if he could give up riding and live there.

Excuse me while I go stick my head in the toilet and flush repeatedly until some sense starts to kick in.

Ahh... Better now. I can't fuckin believe I typed that.

So nuff said about the town. The brewery is pretty great as well. The pour happened and our heads all simultaneously exploded as the dark murky beer splashed on the insides of the glass and then sat with a one and a half fingered head that was in and out like a vegas prostitute. We sipped and the first taste was one of carbonated water. The blueberry was there but you had to send a team out to find the true taste. The rest of the flavours are there. A fruity array of everything it seemed. Like one of those fruit cakes you get at Christmas. Only not so shitty.

I remember these being much better when at work. Not at work, they were drank after you judgy bastards. 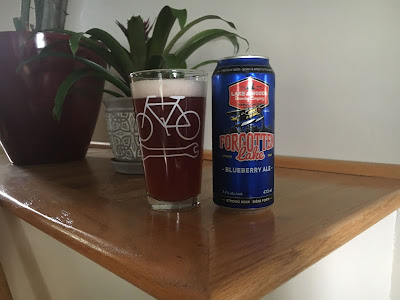