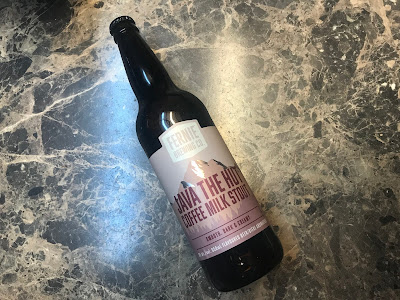 Another Friday evening where day two of days off was had. No ride all thanks to Mrs Lonebiker having a birthday this weekend which forced me to take the afternoon and shop for elaborate gifts that one who runs a rich and successful blog can only afford. I know you must sit back and wonder what kind of things I look at when buying gifts for someone as lucky as Mrs Lonebiker can be to be married to such a fine gentile as myself.

Did that last sentence even make sense?

As I was leaving the Ferrari handbag store I thought how much fun it would be to act like a common person. You know... Much like Bill Cosby wonders....

Aww shit. Writers block. I swear I had something good with a Bill Cosby joke and I just lost my train of thought like some sort of heavy sedative was dropped in my drink.

Todays beer comes from Fernie brewing. Fernie, the home of absolute awesome has had their home brewery featured on here many a time. Java the Hut is their take on a milk stout

Head pourer, Agabail took control of the room and had this one opened and started filling one of the famed Lonebiker Beer review tester glass's.

The pour showed a dark brew topped off with an angry four and a half fingered head which was most likely the result of Agabail's poor pouring ability and she was promptly shown the door. Once the top settled down a nice frothy layer of foam hug the glass as if to say 'I love you.' A good scent of chocolate and coffee. Now... coffee I might add from one of my favourite roasters in Crowsnest pass where their Bushtown blend was used for the coffee process.

The tasting took place and the feedback was a bit mixed. For myself this one is a nice easy stout. The coffee bits are nice and easy. In a sense that they aren't slapping you in the face with each sip. The coffee combined with what I thought was chocolate milk was warming in a way that had me up in a ski lodge in the remote back country. This one is nice and easy to drink but make sure you have others backed up in your trusty beer fridge because you won't want more than one. It's not a bad thing, just the way this one was intended to be. 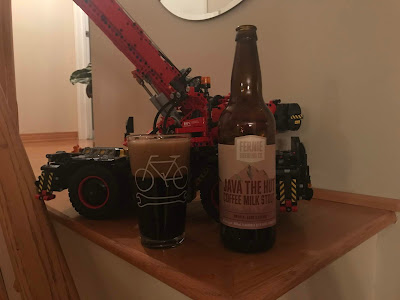