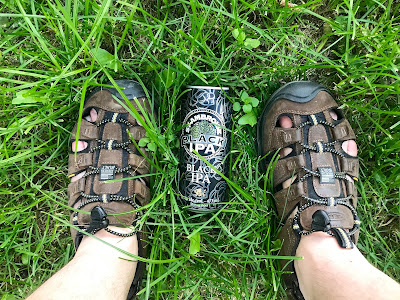 "Beer team assemble!" That is the cry through the loudspeaker megaphone where at LB headquarters it reaches every corner of Beaumont and for an odd reason just off main street in Mundare, Alberta. Quite amazing right kids? People who live in town have been annoyed at the loudspeaker that promptly gathers all the workers involved with the review. It also attracts thousands of tourists who come to town in hope of a lonebiker Beer review call. All of them with their phones out hoping to catch the sound of the call that sends shudders around the worlds breweries.

We have a brewery from Quebec here for today's review which happened rather impromptu after missing Friday's planned post so the review would actually land on a Friday for a change. Oh well, so it's Monday on a long weekend. A day when most people are a bit bummed out about having to go to work. So why not a beer review to help raise the spirits?

St Ambroise you say? Ya they have been on here before. Quite a few times actually and I was quite smitten by the amount of St Ambroise beer pics done on here and now sit forever for the world to see.

We poured and this one delivered on it's intent of being badass and dark. I held the beer up to my and looked at the sun and saw no sources of light coming through. Wow! Incredible eh? Would you get this kind of top notch research on any of the other blogs doing beer reviews nowdays? Hell, they even have an app where any hoser can post their thoughts and reviews on a beer with no training.

Once we settled down from the pour we started the testing sessions. It was at first a fearsome event as some of the interns did not like the look of this one. I slapped the back of their heads and took control. The beer has a strong scent of hops and malt right out of the gate. Once sipped it showed us that its more than just a super dark beer. It was a Friday night in a glass. Ugh! why am I not posting these on Friday's anymore!?

We found hints of black liquorice which would send some people running  but it was done quite well. I hate black liquorice and the review kept running which says a lot. The last beer which tasted like coconut resulted in an odd and untimely studio explosion. The malts are strong with this but you can detect hints of dark coffee and toffee. This isn't a beer I would recommend on a hot summer day which this is. It would be perfect in the fall or winter but don't let that dissuade you if you wanted to try it out now.

Go ahead champ, you deserve it. 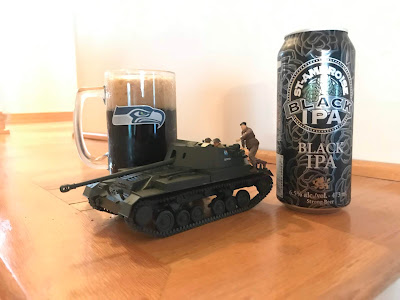