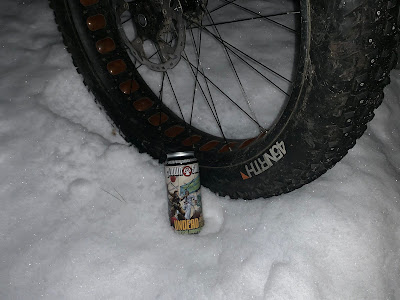 With a bounty of fresh snow we are bringing you Beer Friday direct from the.... Well damn it I couldn't think of anything clever to write.

With a bounty of fresh snow we are bringing you Beer Friday direct from the the North Pole.

Ok, that sucked. One more.

With a bounty of fresh snow we are bringing you Beer Friday direct from the the White House.

Yes. thank God it snowed. I really am sorry about the Dad jokes. I was hanging out with thug #2 today (lonebiker offspring) and can only think in bad Dad joke rhythm. Wow. This is so white of me, I mean really.. The bad jokes, the Dad bod, the wondering about my RRSP's contribution at work. Should I just cave and go get that Dodge Caravan? I mean I am probably about eighteen years too late, so it ain't happening.

I'll just drink a beer instead and give you my thoughts.

Clown Shoes located in Boston. Home of many things awesome including the awesome accents that very oddly turn on a lot of ladies. Also home to some prominent sports teams who like to win. Clown Shoes opened in two thousand and nine and were bought out by Mass Bay brewing in two seventeen.

We poured in the testing lab and were greeted with a very dark and angry looking beer. This one looked like it was angered by a wrongful death of a family member and it wanted revenge. At 9% we felt the fury as it gazed up at us from the glass. A short and stubby one thumb head eventually evaporated to the point of a thin layer with lacing hanging on the sides. Oh yum!

We sipped but not before enjoying the strong aroma. Dark chocolate, nuts and some sort of Christmas scent that I could not really discern. The sip gave me a good malty shot of chocolate with a bit of a bitter kick. It is very slight, the bitterness that is. This one is classic craft beer. Dark chocolate. Old beat up citrus. roasted nuts. The high alcohol is definitely noticeable.

Oh shit! I got it! The Christmas flavour! It's mistletoe! 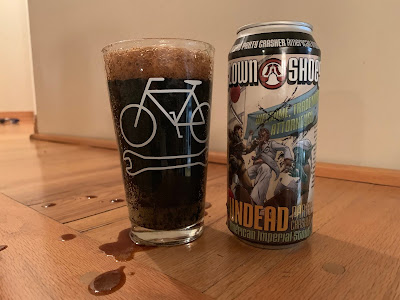