Happy Canada Day kids. We went with Canada's home beer for this one and brought in Molson, Golden Ale for today's Canada Day beer tester.

So how come no ride was posted today you ask? With the now wet summer theme we are having with non stop rain and with the amount that was coming down I wanted no part in being out in those conditions. It was that type of rain today that I dislike the most. Maybe this is only an
Albertan thing but torrential downpour for fifteen minutes followed by sun for ten and then overcast and rain again...

Just make up your mind on what you want to do sky!

So I sat in my house and went on a pattern of Netflix iPad time mixed in with Nasa and Smithsonian channel shows saved up on our PVR and of course some live NFL Network programming which made for an ok day up until about two-0-clock when the boredom sunk in. I should have ridden then but that was a point in the day of heavy rain.

Much to my surprise is Molson Golden has been around for quite a while. A visit to the local beer store to try and get something Canadian and I grabbed this naively thinking it was a new product. Wait a minute, hold on a second. Did I review this already a long time ago? I already picked up the wrong beer tonight once. A quick Google search told me we are fine and Olga poured this and it showed a strong four and a half fingered head stacked up just nicely and I knew Olga fucked this up.

I gave her a bone chilling stare.

Once the beer settled down which took little time we took our first sip with high hopes this will be like this Molson M review that blew our minds in the early days. I could not find anything on the Molson website about this one but did see that this is a re-release of Molson Golden and could not find any other info in regards to dates.

We partook and we were not blown away by pure awesome but we were happy. Tastes of classic Canadian pilsner wheats and lightly toasted malt. This one does feel a tad watered down but you do get that with pilsners sometimes. If you can find this I'd recommend it. The golden foil (its not real gold!) adds a touch of class as I pulled it out of the bag after I got home from the store in my model paint stained Pear Jam t shirt and track shorts accompanied by black flip flops.

My day off stay at home gear is pretty dope. So is this beer, well it's ok.. 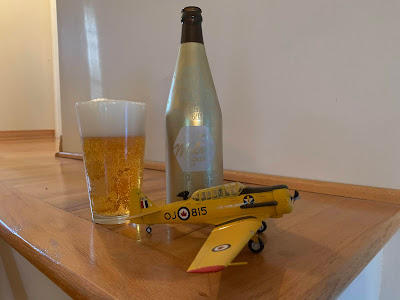