Sunday. A Day For the Crazies 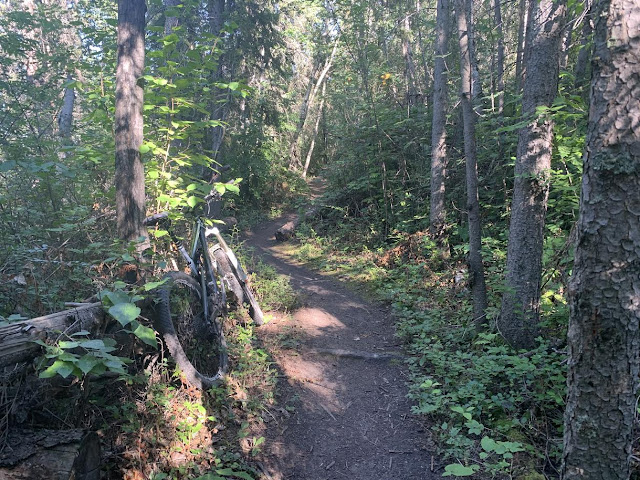 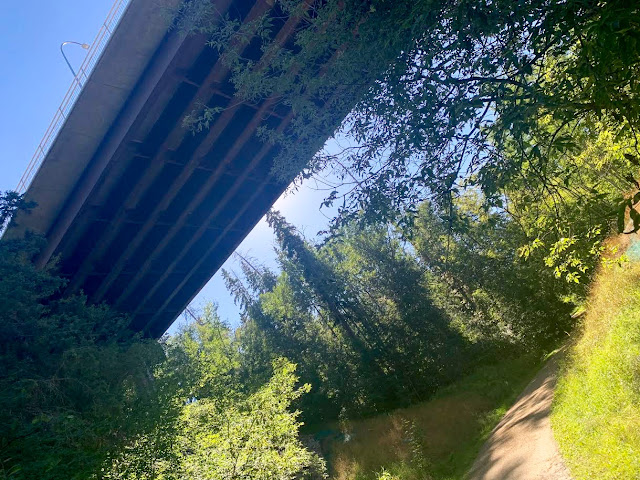 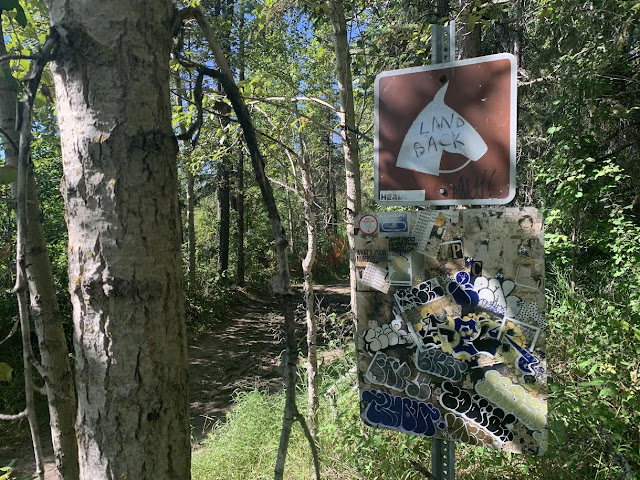 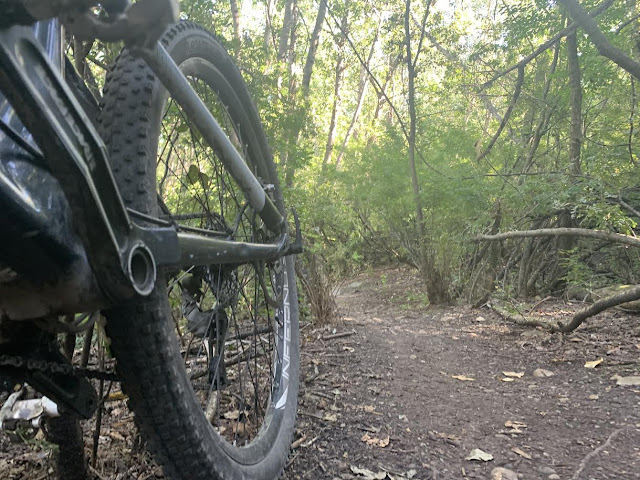 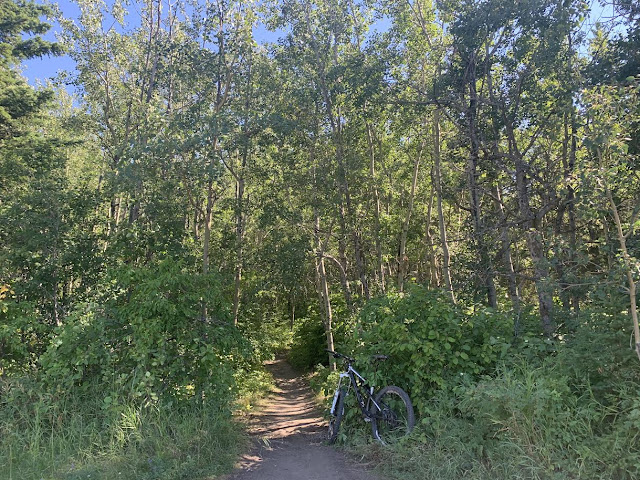 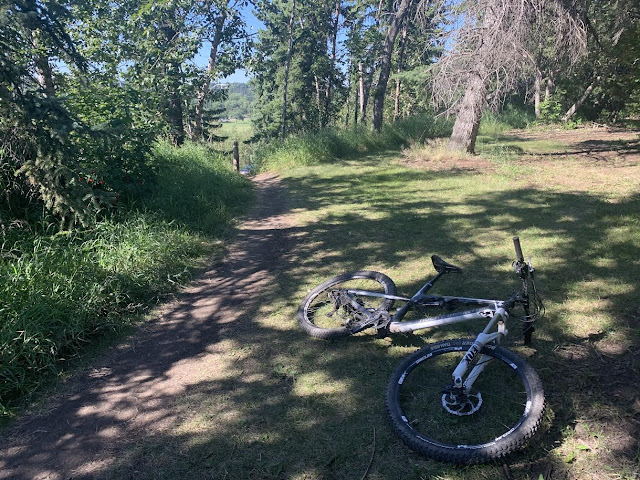 Why is it always on Sunday? The nutjobs are usually out and roaming around the streets in their narcissistic Sunday state. It started on the drive into the trailhead when I was almost run off the road (no, it wasn't a Mercedes or a Dodge Ram) by a couple of cool Edmonton guys driving a Ford Taurus.   A hard brake prevented an accident luckily as I handled that Jeep like I was Greg Lemond. Aww shit, wait. Thats an old bike guy. I'm thinking more of a Tom Petty. No wait! Kyle Petty!  Nailed it.

It wasn't too long after the near miss I parked at Kinseman still rattled and quite pissed about the experience. The bad vibes were worn away quickly on the bike despite the insane amount of crowds that were out. I knew once on the singletrack things should be relatively people free and they were. E.M.P blast took me to Emily Murphy where the crowds appeared yet again. I thought the malls were open, I guess people don't want to wear masks.

The first crazy person was on RayGun. Well he wasn't crazy, just crazy fast. I made the initial climb upwards where RayGun and the original Six Shooter branch off. The guy was waiting at that intersection and I could tell was riding the loop opposite of my direction and knew I would probably see him. Well.. I saw him once... And then I saw him twice.. It was the second appearance that upset me. I mean, how slow was I? I booted it out of there and took the last exit out where I had to pull myself together a bit. The bike was on the ground and I was walking back and forth trying to look cool but also catching what little of my breath and dignity I had left. Little did I know the RayGun speed-demon popped out of the trail and I almost held him back. The photo above is the before pic before I plodded on the trail and got in his way.

I watched him ride away impressed at the lungs and stamina. Once I started to question my sexuality I hopped on the bike and rode down Machete.

Dirty looks were had by more shitty white people as I crossed the multi use trail at the bottom of Machete. Yes I was descending fast but I was in control. Once near the bottom I had slowed down significantly so there was no reason for the attitude. Yet, they are white people so something must have offended them.

I seriously contemplated going into Laurier but it had to be done. The Sunday vibe seemed strong today and images of angry overweight dog owners chasing me for just riding a bike on a designated bike trail ran through my head.

I rode Laurier. Not a soul. The easy climb out was had and I entered Mackinnon.

it was about a third of the way on Backbreaker when I met Karen. It was right at the awkward rooty climb that turns. I knew someone was there but focused on the trail and rode it up. Immediately I was berated by a woman wearing a very loose fitting mask for not wearing a mask. In the woods...

And here I thought she thought I was cool for that killer climb I just did.

I didn't reply. I just laughed and waved my arms around at all the trees and extreme lack of people and rode away shaking my head. *see disclaimer

I rode the disappointment that is Backbreaker out where the third annoying person of the day (RayGun rider not annoying) came down the multi use and paved riding a dirt jumper. It was a classic muscle head sort of guy. Heavy tan, white apple iPods, some tribal tattoos (hell yea!) and of course. No helmet. How any enraged left winger pictures an Alberta oilfield worker.

I exited back breaker and rode the multi use and took the hard left onto the paved where I saw the muscle head on top of the hill across the path. I knew it was a guarantee he was going to blow by me unannounced after he came down that hill and that he did.

I did step it up to catch up to him quickly and once he felt me approaching from behind he would hammer on a hard sprint to get away. I've literally had 10 year old boys do this to me, not a grown man. I kept on him and he kept sprinting, it was quite impressive as he did not want to get passed.

They say that cocaine is one hell of a drug.

Sadly I had to exit early and almost missed the turn as I was having fun making this guy ride like a maniac.

It was up to Purple Haze and the old museum where Lover... ugh, I can't. Groat Road Rollercoaster took me out where I came around for a visit to see my fine lady, Victoria.

A great ride, despite the strangeness.


* We here at Lonebiker industries support masks and will wear them when required to do so without any sort of fuss. Don't want to get tied in with those anti maskers. Those weirdos are super mega fucked. I was wearing a mask prior to by-laws, not trying to be a pretentious douche or anything I just really don't want myself or anything lonebiker related tied in with the anti mask movement that is happening right now. I just do not support annoying Karens yelling at everybody. Especially in the middle of the woods. Thanks kids.
at August 16, 2020