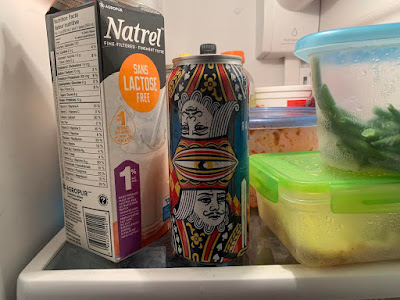 Late on the review this set off and annoyed again that I have resorted to call any beer review 'Beer Friday' even though this is on a Tuesday. Yes a Tuesday in February in Alberta after a lame long weekend. What a shit day this is in the grand spectrum of things now ain't it? Today there is absolutely nothing important going on for anybody other than their respective birthdays.

Now hold on.. Let me Google today so I am not coming out looking like a giant jackass yet again.

There is nothing going on. I looked. Even the celebrity birthdays are quite lame. Can we continue?

Yes another set of days off are slowly coming to an end. I have tomorrow and then begin the switch to nights where I work a week and then am off trying to recover and ride and it usually takes the whole week to recover as of late. I hope that isn't the case and hope to dump some rides on here in that week as opposed to moping around the house in a lethargic state of piteous self absorption.

Today's beer comes from Calgary. Home to a major Canadian Pacific train yard which I would guess be the rail gateway to the rockies in Canada. Have they been on Lonebiker before? I did the failsafe Google check and it turned out no. A scroll through the archives showed me we were safe and by archives I meant a Google search. The beer review archives are a real thing and you can find them on the right. There you will find every beer reviewed on here since the beginning.

So we poured. And we poured with Friday night vigor on a lame Tuesday.

It gave us a massive four and a fat thumb head that took forever to dissipate. Now that we are down in the beer review centre it is down to the skin and we can partake. A few sniffs and the standard IPA smells came at you. I got some fun forestry pine with some strong hops coming towards you like an angry hornet but yet, that wasn't the case.

The first sip in now what is a peculiar new IPA trend where it isn't bitter. Now that is fine by me. But how is a true blood soaked IPA fan think about this trend of taking that IPA sting out of IPA beers? No thanks to douchenozzle beer bloggers such as myself crying about that IPA sour sting.

As for this beer, it is freaking delicious. Now sorry tru blue IPA fans, and I get you... believe me I do but this one is hitting some more home runs. Have we had a shit beer here in the last few months of beer reviews? With more than half dozen lined up from gifts and they all look amaze, we might not have a bad review for a long time which might raise some eyebrows. Eyebrow raisers now listen here. There is a hell of alot of great beer out there all thanks to these micro breweries.

Ritz crackers somehow come in the mix in an amazing tasting but mild IPA. That IPA sour aftertaste was not there as stated a couple paragraphs ago. Grapefruit, Ritz and an assortment of summer citrus flavors made me sad that I only had one. Another one of these would have been perfect. 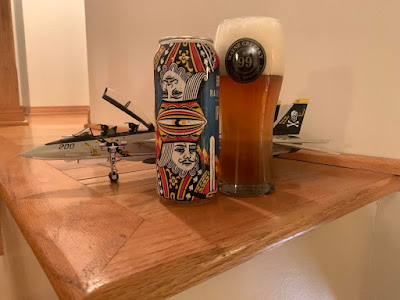