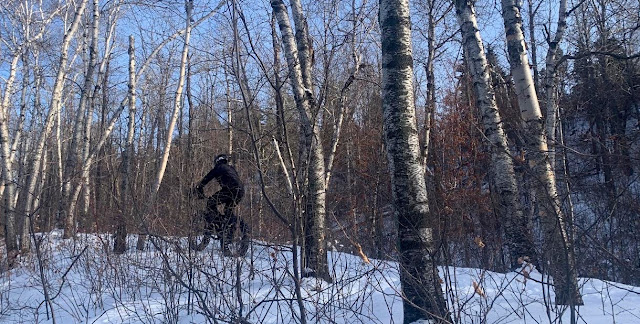 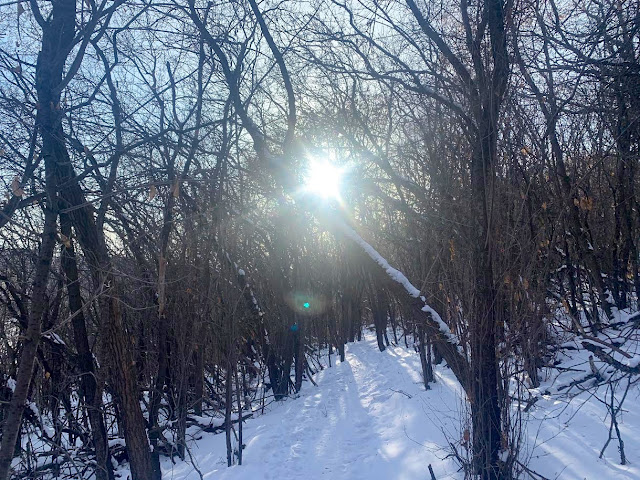 It was a short lived ride with the best of intentions after a long lull in rides together as we are good boys and behave to the local covid restrictions. In fact, we gave ourselves covid tests in the parking lot prior to leaving our vehicles

Yes I know... I'm sick of hearing about it too.

The short seven km ride which I think was shorter for Kent after chain failure at the 3.5 km mark. We started at Mcnally High school with a quick plan made up while on our bikes to head east cross the capilano and hit the Dawson park trails before crossing the Dawson bridge where Ewok would finish this one off.

None of that really happened.

We did ride Caddytrack and Andre's trail and the conditions were perfect. An area I don't think I have frequented that much in the last couple of years and I am wondering why? Andre's has got to some of the best singletrack in Edmonton and it did not hold back on the awesome today.

Fat bike ruts were there but only on the steep sections as opposed to everywhere when the weather was warm. Yes this weather sucks but it's keeping all the newbs off the trails leaving them in terrific shape as the only people riding now are the ones that know better (not saying me so stop with your judgy eyerolls!)

We crossed the Capilano bridge and when we started the ride up where Kent thought he would take the stairs and ride up his chain snapped and we were done.

You would think that at least one of us with all the years of riding experience would be well prepared for anything especially in frigid weather.

Nope. No we weren't. It was decided that I would push on as we were standing next to a new trail.. Hold on, let me check Trailforks.

The trail is called LowClass, I was hoping to get a better idea from the pictures but it's that same weirdo who takes pictures of his bike and plagues the Edmonton TrailForks pages. I am pretty sure that is that I rode today.  I'm assuming it's been around for a while, a simple climb up the hill avoiding the lame stairs is all it is and it was pretty great. I took another trail for the first time right after LowClass by the name of Higher Education up to the top. I learned that Higher Education links up with Snakeback up top which makes that little area quite great now and would be great to link all together on a ride.

I turned around and thought I would try and meet up with Kent who was walking his bike back. I found him at his car at the end and the ride was done. That mothertrucker even walks fast!

A great ride, although way too short.

*Kent Steeves photo credit third down from top.
at February 15, 2021