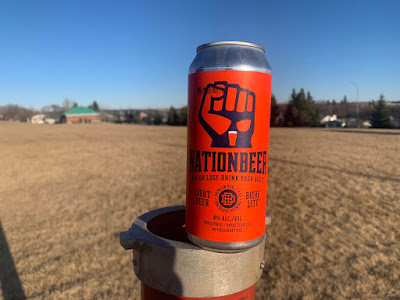 So the Oilers fans have their official beer that has been around since? Ok wait... How long has this been around? Sorry, I don't know much of anything. I do know that former Oiler Andrew Ference was the one behind this as he wanted a beer just for Oiler fans, or at least that's what the internet told me. Internet you say? I don't trust that thing one bit.

But hey... Andre Ference is a cool guy, he rides bikes now doesn't he? That in my book makes one quite cool. He does ride mainly road and apparently is one of them stair runners in the river valley that we see while we are cruising around the valley's sweet singletrack.

Dog House Brewing located in Slave Lake has been open since twenty sixteen. The year Donald Trump took office in the United States white house. It's funny, that seems so innocent compared to things now.

This is apparently the beer specifically made just for Oiler fans. My first question was 'why is it a light beer? Weird..' If you haven't been around here during the playoffs or at any Oiler game it would appear that Oiler fans like to get drunk. Well white girl wasted drunk.

Hold on... I'm talking about sports fans here. This applies to pretty much all of them.

So lets go to the pour. Was this one brewed with Ryan Smyth's sweat and tears? Will see.

So we poured this one and it gave me what I thought it would. Until I took a second look. this was not your typical light pilsner pour. It has a murky dark undertone to this one and I am intrigued. It looks almost chalky. A small head stayed for a while and left us some pretty sweet lacing in it's wake. The nostrils were taken aback with malt and light corn as we tried to get this faintly odoured beer figured out.

We tasted and were pleasantly happy with the outcome. Would this suffice one of those knuckle dragging morons who phone in to the local am sports shows with their Oilers opinions every night? Most likely not, but fuck those losers. For a light beer it is better than I expected. Although I won't be writing letters to long lost family member about this one. Mild hops take do not take you to flavourtown (*copyright, Guy Fieri.) It's hard to discern a true taste to this, I keep wanting to type out green grape but don't feel like I should put it in here. Wait.. Oh well.

If you are an Oiler fan, You must get this if you already haven't. It's hockey beer, the 'light ' factor does not make sense though for hockey fans in northern Canada. 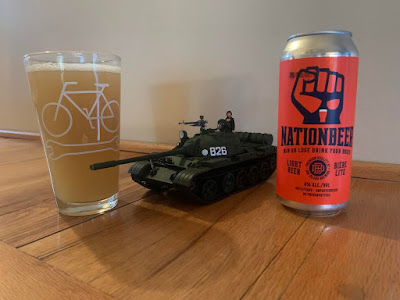