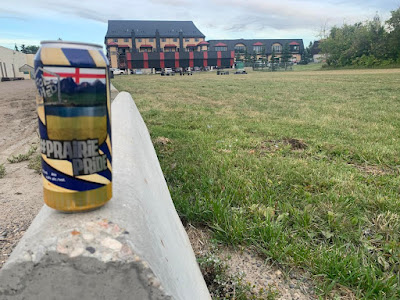 Oh hey guys... I am back after what I believe is the longest absence in Lonebiker history. Siri says it was thirty six days since the last posting (sans recent music post) which was a beer review in where I claimed I would be gone for three weeks and back on the seventeenth. Little did I know that they had other plans for me and was basically told I would be staying until the twenty seventh of August and there was nothing I could do about it. I was there already and it being a remote diamond mine in the far north I could not just hop on a bus and come home. Even Fort Mcmurray has the 'go home' option but out there is a little bit different. I am sure if I made a big issue out of it they would have sent my ass in the back of a cargo plane home but thinking of the overtime money and coming insane paycheques I knew I could get a new bike. Plus whining in the trade world is something you cannot quite do as well as one would in cubicle life. Throw in welding and mining and the whining should cease... So you would think. The amount of whiny bitches on site in the last month was a tad overwhelming. You would think given the testosterone in a place like a diamond mine with everything being large, loud and powerful but sadly oddly that was not the case.

What's that you say? New bike?

Yes. Not a lot to say about it, it was already picked out years ago and just have to put the wheels in motion. I will say though that it looks like I will be entering the land of twenty nine inch wheels which hopefully doesn't turn me into a pretentious douche which I see with so many. What the fuck is wrong with people? Why can't they just ride their bike, be happy, cool and shut the fuck up about their wheel size?

Yes I am a bit edgy, thirty three days in a remote mine will do that to you. I might have more stories on here later but the routine you get into is what makes a long stint possible. I was on nights which makes the routine all that stronger. But the company I work for whom I once respected had me in courses in the middle of the day when I was sleeping after working a long twelve hour night with so many more ahead of me. They really could give two shits about mine or anyones well being. I also saw some of the worst in human behaviour and was on the receiving end of some of it. My once passive personality eventually had me telling grown men to go fuck their Dad when I was on the receiving end of ones bullshit and it would usually work and I would be left alone. Yes it was a bit brutal but it would help me fend off the douchebags.

With the hard work and lack of sleep the annoyances of little things like people not replying to text messages back home did put me on a next level of irritability and if you happen to read this and it was you I want you to know, You Suck . The internet was very slow and would cut in and out when you did have it so texting on Whatsapp and Instagram were my only options and I had very little time. I did have a room phone but that was dedicated to Mrs Lonebiker and Lonebiker Jr one and two...

Today's beer comes from Calgary, Alberta and well is a bit too heavy on the Alberta pride right now for me. Maybe it's cause I'm tired as fuck and quite irritable but this Alberta pride shit is getting a little out of hand.

We poured into the now long ignored taster glass in the taster lounge and saw a typical pilsner style filled with one hundred percent Alberta goodness. It is actually quite slick to think that everything from the yeast to the canning machine was made in Alberta. Hat's off to Tool Shed for this. That is a rare feat is it not? It was golden with a large four fingered head that stood atop trying to intimidate me but I've had some pretty badass beers in the past and this one knew it and ended up slouching over looking a bit pathetic.

"I thought you were a tough hard as fuck Albertan!" I roared at the beer forgetting it is pretty much an inanimate object and doesn't respond to my yelling. It stood there and did beer things like dissipate it's once big head.

It tasted fine, Along the lines of a typical pilsner like the Bud's and the Molson's... Oh what the hell did I just do there!? This is much better than the Bud's and the Molson's and is not a pilsner and ranks under the guise of farmhouse ale. It is quite tasty This one is middle of the road between light and dark. The carbonation is well balanced and this is what would go great as a post ride beer. 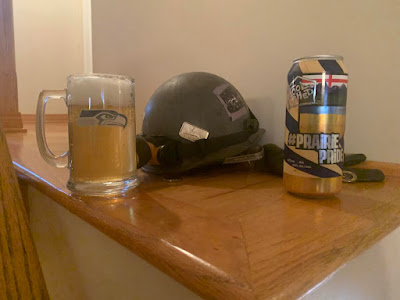