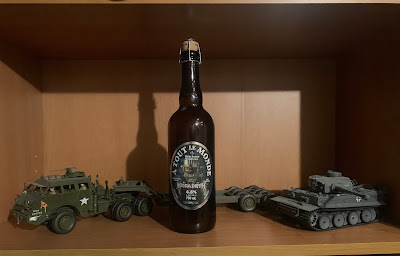 I swear this one has been sitting in my den for well over a year, we were a bit scared to review it for the reason that it looked a bit intimidating. With Megadeath partnering with Unibroue brewery we were left with a dry hopping technique that ended up being low on the alcohol scale and sits around 4.5% in the end.  So not sure what I was intimidated about, the scary picture maybe?

I'll be honest, I love hard music as much as the next guy but I cannot for the life of me name one Megadeth song...

Yes I know. I'll wait for everyone who is getting up to leave to get up and leave. I suck.

To the Megadeth purists, I am truly sorry. The song... not too shabby. The beer did come from Dave Mustain and Unibroue brewmaster Jerry Vietz. I believe Unibrioue has been on here years ago and a quick check on the archives confirmed that, the brewery is in Chambly, Quebec and was started in nineteen ninety.

it poured a nice bold gold with a bit of an out of control head which was clearly the beer pourers fault. After he was fired and the position replaced we got our photo with a fine looking one and a half fingered head, smells of yeast and dark fruits came through and made me a bit trepid with anticipation as I had a feeling this one might blow the socks off of me right in front of the whole beer review team.

We sipped and it delivered on strong tastes. Dark fruit is the underlying underbelly of this tasty beer. The mouthfeel of this one is quite swell making one want to enjoy this beer for a long time which was shown with short sips with an exaggerated mouth hold on the beer. Bready yeast and herbs and fresh cut grass at an upscale golf resort seem to round it out. 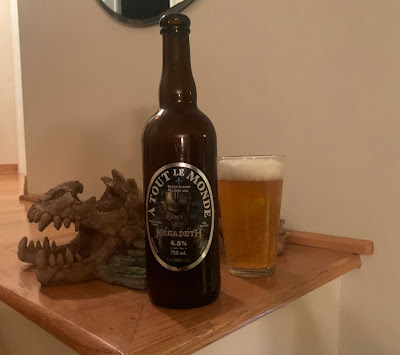