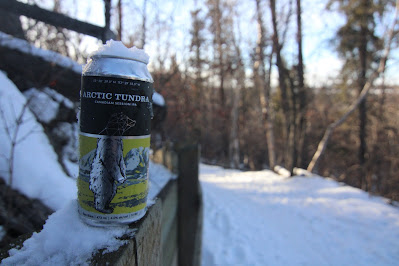 Oh yes, I know we missed Beer Friday last week off and the way things are going this one if I don't do it now it probably won't happen.

A week coming off nights has started quite terribly resulting in no bike rides and I am now two and a half straight days of pure housecoat wearing splendour, mind you a dinner out was had breaking the streak. I do believe I have a five or six day streak of non stop housecoat wearing debauchery in the deep cold winter when I was new to this night shift thing.

Naive and dumb, I genuinely thought that night shift recovery gets better with time.

Polar park brewing resides in our great city of Edmonton and this one was donated by a fine chap at work and was taken on a bike ride for the top photo. On the ride the beer did take a tumble and I damaged the top of the can. So if there is anything unusual about this one we will abort the mission and I can tell you all about my favourite train streaming YouTube channels.

Their website shows a decent looking pub attached to this brewery which has me intrigued and would like to pay a visit. It shows it is in the Whyte ave area and I am now quite perplexed as I cannot figure out where this is. A quick map visit had things sorted out and we were ready to pour.

A  very bold looking golden beer flowed into the tester mug and quickly showed it's big dick energy and sported a four fingered head right off the bat. Two interns fainted and one had to be driven to the hospital with chest pains. The amaze was too much for some.

We sipped and were met with a delicious tasting IPA which does not come with the once traditional IPA bitter beer taste that was once so synonymous with that style. Oh yes and dumb well trimmed beards and old man hats. It has a slight tropical feel to it. Grapefruit helps this one on the freshness scale, floral hops with a touch of pine and loamy earth oddly rounded this out for me. The river valley tumble did not jeopardize the contents of this brave beer.

It has a grainy type of smell to it which isn't too strong. Strong in other regards? Not really. 4% but no complaints. It was quite great and wish I had more than one. 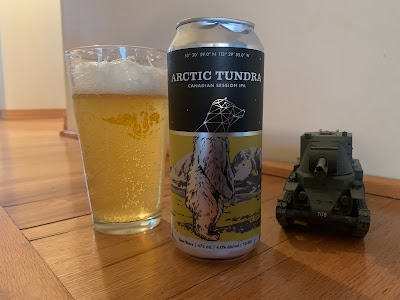