Welcome to the first Covid positive edition of Beer Friday. It has now been a full week of being infected with that gross bullshit and the last two days I was finally up and moving around. Yes it knocked me on my ass quite hard but me and Mrs Lonebiker pulled through. Yes, my wife had it too and for the first time as a couple we got sick at the same time and pretty much every day it was the same symptom after symptom.

It was kind of weird.

So I do not know what will happen for this bike week, a ride out in the valley would be over the top right now after this last week but it is hard to say if anything will happen. Ideally an easy bike ride sometime this weekend should be in the cards but common sense could kill that.

The plan was to get an Edmonton and Calgary beer and do a Battle of Alberta beer review in honour of the great playoff series happening but covid kinda rained on that parade. The runner for the review team luckily picked up a beer with no recognizable traits from Edmonton or Calgary. So we have Ride On Western Lager from Calgary's Banded Peak Brewing...

The can says its from the Calgary Stampede last year so you most likely won't be able to find this so let's do a review because we are batshit crazy insane.

We poured this lager into a primo mug and watched the delicious golden liquid make its appearance to the test team. "Why are we reviewing Calgary stampede beer when this playoff series is happening" I heard some snot nosed intern remark right after the pour.

I did not lose my sense of taste in case you were wondering, my sense of smell however is a bit of a challenge due to heavy amounts of well... You will just get grossed out. I id get a case of a common Bud or Molson Canadian type of smell which made sense given what this beer is. It tasted fine, again for what it is. This is the most common type of beer made and drank in North America and Banded Peak nailed their rendition.

This has everything a good lager needs, its refreshing, its crisp. It did have a weird phlegmy aftertaste but do I just blame this on the covid?

Fuck me, what am I doing? No rating for this one to be fair. See you early in the next week for another review if no rides are happening.

Sorry about this Banded Peak! We understand with no rating and the possibility of a good one you may have lost billions of dollars in revenue from this blog. 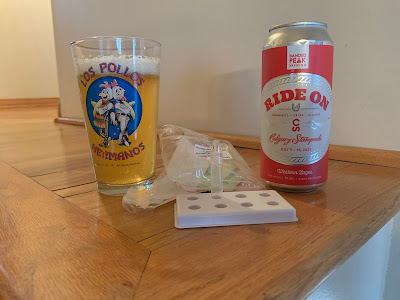