With day shift days off now in the rearview mirror again you would think I would be going on lots of rides. Maybe even a trip to the mountains would happen.

I'll just sit here and wait for the laughter from the interns to settle down.

A switch from nights to days happened mid set last week due to shitty things happening. A local night ride happened last weekend which was a sign I wasn't working when I should have been. In short kids I need bike therapy which isn't happening. With fall conditions being at an all time high right now it is killing me a little bit more every day in not getting out.

This is Analog's brewing premier on here and we know lots of more will be coming. They claim to be Alberta's nerdiest brewery and the cans, website and taproom seem to prove it. I was at the taproom not too long ago with some old long time friends and the experience was great. No food was offered the night we were there but they do have food trucks come by on some nights.

We poured Ready Paler Two into the Bubba Gump tester glass and very little head formed on top of a dirty coloured golden brew that in all honesty did not look too powerful of a beer. Some snide remarks were spoken from some interns who were quickly shown the door. A nice pleasant hop smell mixed with some citrus started things off.

We sipped and a pleasant IPA slid down our gullet with some well rounded hops. A slight citrus taste was evident as well. This one was not overly amazing from the can honestly it was quite delicious in the tap room So maybe I think I should have just done the review there. It was fine and worth a pick up. 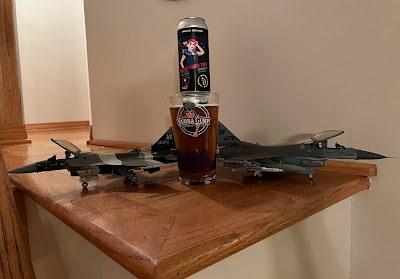