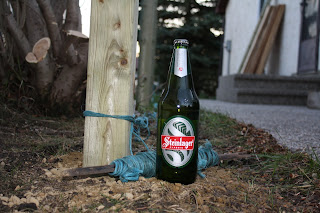 The land chock full of Kiwis is the main attraction of our beer review this Friday night . A proud supporter of the All-Blacks rugby team , the beer is the countries main brew . It was established in the late fifties and was introduced in America in 1973 otherwise known as "the decade of the disco"...........Oh yes , if you haven`t figured out where this beer comes from it`s New Zealand . Have I mentioned that New Zealand is pretty much the coolest country in the world ? Next to Rwanda , Albania , and of course Afghanistan .....HA HA HA HA , I kill me !

When I was drinking this beer I couldn`t help to think of being in New Zealand and doing all the great things one can do there . I`m sure this beer has been drank around campfires and in pubs with lucky people talking about their epic days . The taste is quite all right and I could sit around and have a few more , I do detect a little bitterness in here but it`s nothing too bad to get excited about and throw furniture around (I do that when I have bad beer ). In the end , not bad beer , but would I go out of my way to buy some ? Probably not .