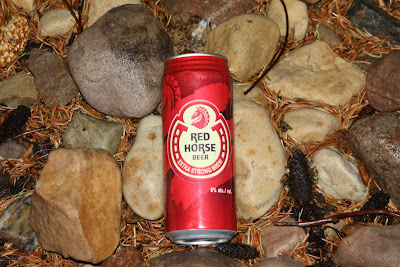 From the Philippines comes a beer that will kick you in the ass , and when your down it will kick you a little more . Brewed by the San Miguel beer superpower , this is the strongest beer in their lineup , 8% .......Ya , that`s right ! I feel badass just typing that . If your scared and girly when it comes to strong beer I suggest you stop reading this beer review and go back to your facebook page and keep on with the virtual farm brotha ! I personally saw a can of this beer stabbing a prominent Edmonton gang member in the neck in my river valley just the other night . I heard Chuck Norris even treats this stuff with respect . This beer commands respect , and gets it ........You know what ? I`ve seen plenty of high % beers out there so maybe this one isn`t so badass as the brewers want it to be .

As far as the tasting goes , a prominent , member of the Philipines government donated this to Lonebiker.com headquarters in Toronto , Ontario so I should start treating this with some respect .........Or should I ?

The pour went well and the beer had a nice gold color with a small one and a half finger head that didn`t last very long at all (probably cause it`s such a rebel) . The first sip told me right away that this was a higher alcohol beer , but after a few more the harshness went away and it tasted quite good (and not because I`m tipsy) A good beer though , this would be good stuff to be sitting around a campfire with and telling riding stories .