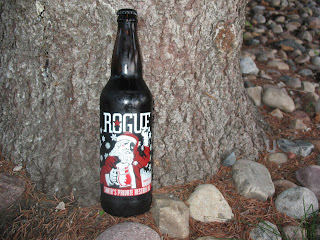 Bring on Rogue ale , from the lovely state of Oregon ( I mean that in a literal sense) Rogue ale was founded in 1988 in Ashland . The lucky brew being tested tonight is Santa's private reserve ale , one out of approximately 35 beers in the Rogue lineup ........Take that Budweiser ! This one is a special Christmas holiday brew , as seeing as how I am coming to the end of my summer holiday`s it seemed fitting .

This beer according to their website features "a double hopped red , with a roasty malty flavour and a hoppy spruce finish ." The pour showed it`s true colours which were obviously red , but to me it had a hint of burgundy in it , a proud two finger head that lasted for a few minutes topped this brew off . I found the taste to be quite bitter with a nice aftertaste that made you want to take another sip . This is one you would want to get in your stocking this Christmas cause it`s special , but that`s it , just one .