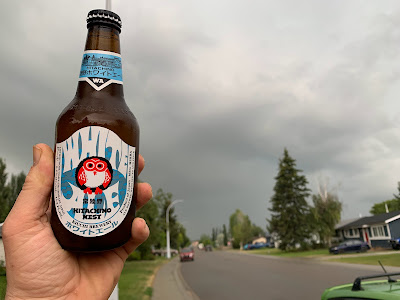 Well would you look at that. It's Monday again and I have not done a Beer Friday yet as this set of days off slowly rumbles by. The stats for this one are really quite pathetic. One thirty kilometre bike ride primarily on straight roads with no curves and plenty of petroleum products being developed in the vicinity.

Wait! There was a hill!

I did ride the rough and tumble Fort Saskatchewan Eastside singletrack so I do have a little bit of deliverance right? Most people seem to avoid that side like it is full of Monkeypox or something.

Still… No deliverance from a weak set of days off riding. I wish I could back that up with home projects being done but nope. I am just lazy. Is it the muggy weather? I have no drive to do anything which has been a problem.

Well at least we have beer.

Kiuchi Brewery located in Naka, Ibaraki, Prefecture Japan and yes I have no idea what part of the country that is from and that is ok. It's an obscure name. The brewery opened up in 1823 putting it's status up quite high along with the other old timer breweries.

Well we poured this ancient Japanese beauty and it poured a dirty hazy golden yellow. A few sniffs we're had and it gave us a a slight fruity beer with citrus and malt. A very short one fingered head did not linger for long and soon resonated to some side lacing with a small concentration on one side of the glass.

We tasted and were a bit delighted from the outcome. A tangy wheat taste with a smattering of citrus like tastes which I could only discern as possibly grapefruit? See how I put a question mark there because I have no idea. Amateur beer reviews kids. This has a great taste that gives you a slight summer feel. Or could it be that we right in the middle of summer so that's why  I probably typed that.

Hey man, it was the citrus taste.

Umm… what else? This witbier does not disappoint and our friends from the far Pacific have something going on here that is pretty good. It was an enjoyable beer that was up there with the rest of the greats.If it wasn't thunder and lightening outside I would be out enjoying the rest of this. 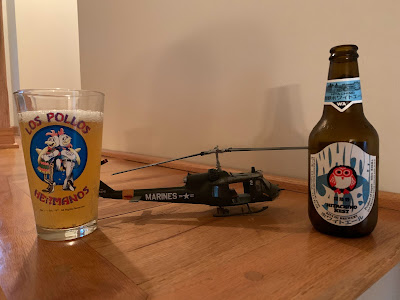