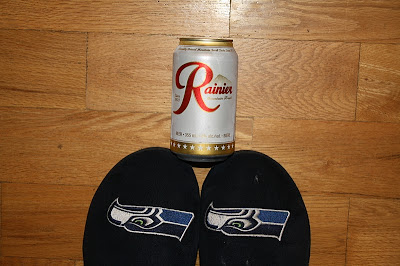 After getting shut out of blogger last Saturday night, a big night as the NFL kicked off in a big way the next day with thirteen games including my beloved Seahawks. A team that looks as bad as they could ever be. A team I will show my undying love for even though I will probably bet against them on every NFL pool and sports select ticket I buy throughout the season. Hey, I may be a fan but I'm not stoopid. With all that being said I bring you Rainier, something to help drown the sorrows for a long season.

1884. Yes 1884 the beer Gods gave birth to this brewery. A wise man named Edward Sweeney started up the Claussen-Sweeney brewing company in the Georgetown neighbourhood of Seattle. Yes Seattle. See what I did there? Genius! Although ironically Rainier isn't brewed in Seattle anymore. As of 1999 Pabst who owned it , closed it down and is now made under contract in Irwindale California. The old brewery, a Seattle landmark is now home to Emerald city beer company. So the glory days of Rainier is now long behind them. I was surprised to find a six pack hiding in the deep hallows of a Beaumont Beer depot.

The pour showed a beautiful golden color that made me stand tall and proud thinking of this beer's glory days. The smell was somewhat like one of the big three but there stood something special about it. More hops I presume? Seriously! I have no idea. And I'm not afraid to admit that. It did have a little something-something to it though. The taste took me back to my very first head trip, hand in hand with Scarlett Johansson through a leafy forest, skipping listening to Enrique sing his classy love ballads.... Wait a tic. No it didn't, I'm just happy cause I could be riding soon. I liked the taste, it had all the virtues of a good beer, smooth, tasty, crisp, and clean.Try it! 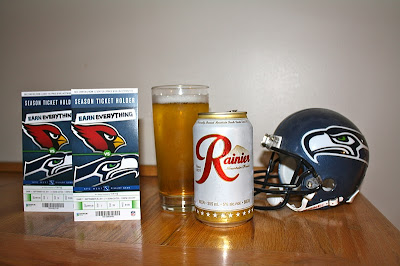