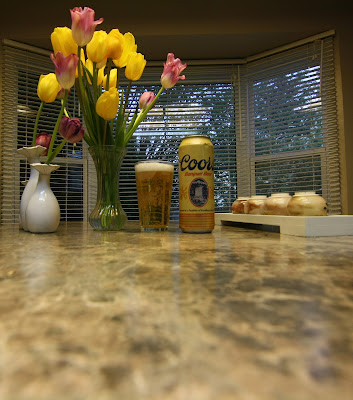 Seriously? This is what I pick? I was in New York City for six days and I come home with Coors to do a review on! With countless craft breweries to choose and I choose Coors! Yes I'm a little bit embarrassed to say the least... My excuse you ask? I had no thoughts about "blogging" or doing "beer reviews" as I was enjoying the city too much. I picked this can up on my last hour there in a convenience store as we were leaving in a cab for the airport. I went in and saw Coors, a beer you can't get in Canada for some weird reason and thought "what the hell?"

So there. I hope I don't get angry letters. I guess even from Coors fans, but seriously. There are far more exotic beers to try from the Northeast United States.

Coors. Established in 1873 by two German chaps, Adolph Coors and Jacob Schueler in the incredibly lovely state of Colorado. Golden Colorado to be exact. Eventually Adolph bought out Jacob and the rest is history. Coors is now the third most popular beer in America with their flagship beer known as "Coors Light" which can be easily found in any college or university dorm at any given time of day. Coors Banquet Beer oddly enough cannot be found in Canada... Well Alberta for I have not bothered taking a trip and searching for it in the Eastern parts of our great country. I have asked people why and was never given an answer. So let me ask Google, give me a moment. Enjoy a Youtube video while you wait.... Well sadly I got no answers, just a Facebook page trying to bring it to Canada, so that answers my question on it being in other parts of Canada.

The pour went fantastic as I didn't spill a drop! It had the aroma of thousands of Lilacs in a dewy meadowy field. Just kidding, it was like any other major beer out there. The taste was better then expected and I was a rather happy camper. It did what it what was supposed to, it went down smooth, and was cool and crisp until it got warm (*Warning* Do Not Drink This Beer Warm, It Will Taste Like A Komodo Dragons Ass) it did have a slightly weird aftertaste though. I was pleased with the overall taste of this being a major American beer and all, in fact I wish I smuggled ... I mean brought more into Canada. This is pretty good stuff, a tad watered down like any major beer but good nonetheless. I wonder why this isn't the popular one and Coors Light is. What a strange strange world we all live in.