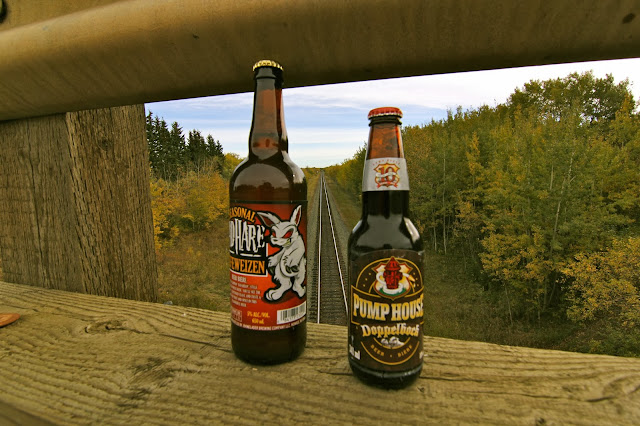 As Fall slinks it's way in all cool and sexy a trip to a beer empire was made to pick up some Fall beers to review. As we all know Fall is the greatest time of the year and all those who do not agree with that statement is probably a giant asshole who beats up puppies, did I go to far there? I don't think so, carry on... My beer wisdom or lack there of showed itself as I helped out a lady trying to find a spiced pumpkin seasonal ale at Wine & Beyond. There sadly was no Alley Kat which is what she wanted so I pointed out the Pumphouse Doppelbock and said it's pretty much the same. "Really?" The young pretty girl asked me with a look of contempt. I puffed my chest out and proudly proclaimed "Why I am the lonebiker. Reviewer of beers, breaker of ankles, and rider of bikes." She seemed satisfied and looked down at the floor avoided eye contact, grabbed a six pack and made a quick exit. I purchased the same beer and decided to review it tonight to kick off the doubleheader. 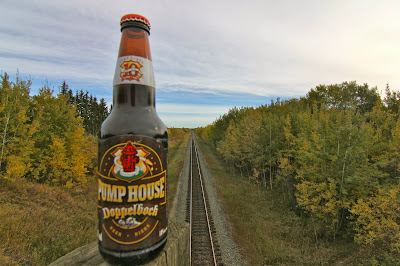 When searching and giving advice for seasonal Fall beers, it is of upmost importance to make sure they actually are made for Fall. Usually pumpkins or something scary is on the label. Well my friends this
one has no Halloween pictures or bare trees on the label but it has something quite freaky. A 10% alcohol label. Yes that's right. 10%! This is on bad ass sounding beer. This beer is in celebration of the brewery located in Moncton, New Brunswick turning 10. Do you see what they did? Pure genius. Pumphouse made an appearance on here I believe two years ago when my Father in law's barn burnt down. The brewery is located in an old fire hall and was established in 1999 which tells me that they kept brewing it since the ten year anniversary. Or they are incredibly giant liars.

Being careful with the pour as a beer this potent can be dangerous to handle. Children and Cats have lost limbs when in contact from beer like this and a nervous pour person. It turns out I poured it like a rock star. A dark and angry beer gave me menacing looks topped off with a proud three fingered head. I gave it the flashlight test and the beer failed as light was seen coming through the glass. Instantly I was not so nervous about the review. The first sip showed the alcohol was there. Yet I wondered how could you hide 10%? They did a good job and it wasn't potent. It was just slightly there. Dark burnt coffee, burnt sugar, and burnt dreams of little kids was evident as I finished this one. Noting the lacing was very slight on the glass on the way down. A bit bitter going down, this is a good one to have on a patio watching the leaves change. 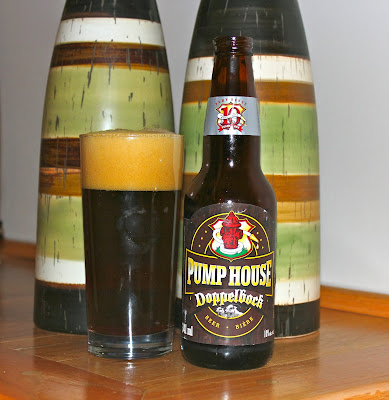 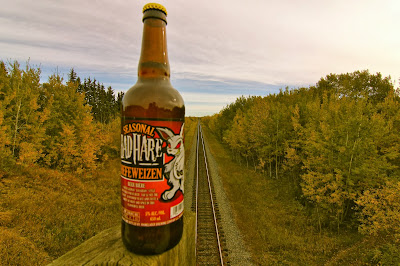 Beer number two comes all the way from glorious Monroe, Wisconsin. Did I just say glorious Wisconsin? I don't think of glorious when I hear the word "Wisconsin." What do they have that makes them so glorious?  I'm really sorry but that 10% beer from earlier really screwed me up and I might a be a tad tipsy. I get ornery when I drink alone in my den on a Saturday night. After this beer there is a good chance I will end up naked and passed out on the front lawn again, but that is my wife's problem so she will worry about that when it inevitably happens.

Rhinelader's Hefeweizen is a seasonal beer which I conveniently can't find anything about it on their website. This beer is a true hefeweizen which makes it a wheat beer and is very low on the hops which I find a bit ironic seeing as they have a rabbit on the cover. Come on Rhinelader folks, you are not fooling me. I'm sorry, that's the beer talking again.

The pour was not as glorious as the first one of the night but luckily I didn't spill any. A one fingered head made a short stay on top of a murky golden coloured beer. The first sip was a bit of a disappointment compared to what I just had. Am I liking the strong beers now? Have I turned over a new leaf? No. The answer is no. I just appreciate good beer and sadly this doesn't fit the bill. This could very well be a lonebiker vs hefeweizen thing which I am just learning. Just like the IPA's, I may have to try and develop a taste for it. A wheat offering is there when tasting mixed with old dried banana. I am sorry, this one is not for me, try it as I am sure there are people who will dig this and may raise eyebrows when reading these reviews from now on. 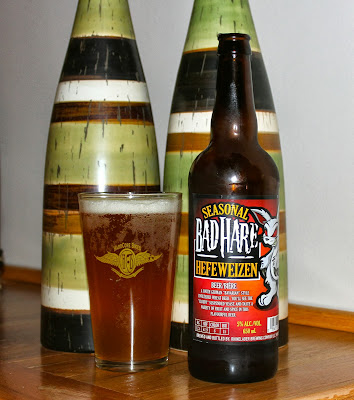