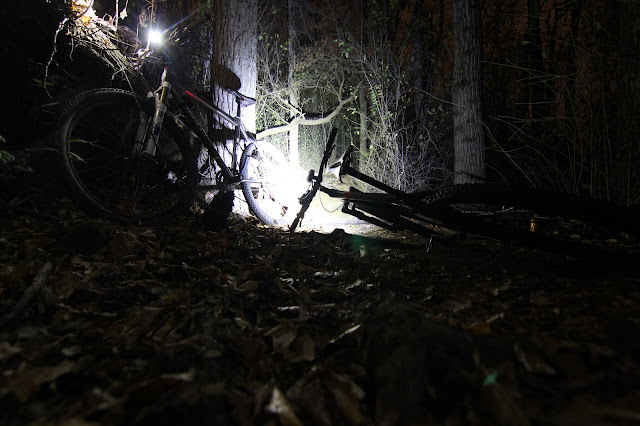 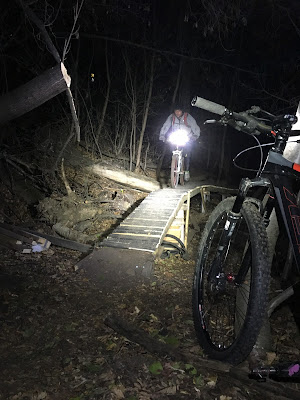 A meet up with Kent on a cool Sunday evening on some rather incredibly well conditioned trails. After missing a couple days of rides all thanks to family and grown up stuff this was a much needed trip that really should not have happened.

It was another reminder that riding bikes on bumpy trails is quite simply the greatest thing a person can do whilst spending time in the outdoors.

Doing it with a good buddy? Makes it even better. Well a lot of the time. I do love being by myself and all...

We started in the Science Park where the usual creepy old men in pick ups and dirty old mini vans drove around and parked in aimless locations throughout the parks parking lots sitting in their vehicle staring out the window. One day... One day I am going to get the nerve and rap on a window and asking them what the actual fuck is going on. That shit is real weird kids...

My older lights which I believe shine at a whopping 140 lumens were no match compared to Kent's which run at around I believe one million point five lumens. I'm not making that up. That's what he said, I promise. That combined with a helmet light that was two million lumens when he was behind me I had thought one of the trains had derailed from the track from above and was coming down the trail to run me down. "Holy Fuck! Ken't.... Traiiiiiin..." I yelled in the magical style in Stand By Me and jumped off my bike into the bushes.

'Whirrrrr...' The sound of Kent's freewheel made as he went by while I laid in the bushes with newly soiled shorts. I would dust myself off and keep riding embarrassed by my actions. It happened several times throughout the night.

Pogey trail, Pipe Dream and the creepiness of Cambodia was all ridden in the dark. It was great. We rode the new trail again, what's it called? Swank? Penthouse? Barely 18? Juggs? Penthouse Forum? Ugh... What is the name of that new trail?

Anyways.. It was much better than our first encounter. New bridges over the shitty parts were much appreciated and kudos to the ones behind it.

Gold digger and Moon Raker finished off the singletrack and we hopped up to Ada to take us home.

My lights died about a minute from the vehicles.