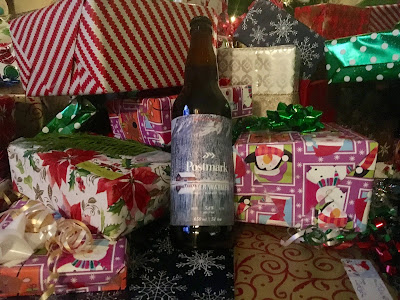 Greetings all the way from the North Pole! We took the entire staff of lonebiker Industries all the way to Santa's village for a most special Christmas Eve Beer Friday spectacular! Dasher is here, he had to stay back due to a bad case of hoof rot. So he will be the special celebrity reindeer doing the pour. As you guessed the fat bastard is out delivering presents right now leaving us to the confines of the toy shop to conduct our beer review.

Well as it turns out Dasher completely screwed up the pour. His stupid ungulate hands with no opposable thumbs almost dropped the only bottle we have for testing tonight. The ONLY bottle. "Hey Dasher, you miserable, stupid son of a bitch! You almost ruined Christmas!" I roared at him. Everyone is sympathizing with the stupid reindeer as it left crying. I don't care, you don't take these beer reviews serious you pay the price!

I poured the bottle and the beautifully labeled bottle gave us a dark beer that looked like it wanted to warm our hearts and forget all about Dasher's horrible mistake. Smells of caramel and dark toffee mixed in with earthy hops greeted the senses. A light foam stayed on top of this one with lacing on the sides of the glass.

The first taste was quite good. A slightly bitter beer with earthy hops, as we continued to taste it I got more toffee in the taste, that with a skiff of caramel. The earthy hops made the mouth sing 'Joy to the World' as I sipped away. Dasher looked in from the cold outdoors crying. I ignored him.

Do we call this a true Winter Warmer? I would say no. In my humble amateur view a true Winter Warmer would be a high alcohol beer. Hence the alcohol is there to warm you up. Am I right? Makes the most sense to me. Although higher than normal. Postmark's Winter Warmer comes in at 5.8%. Still though, it is quite delicious. 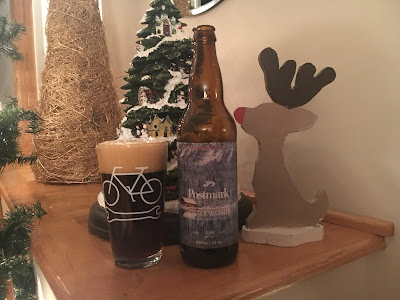