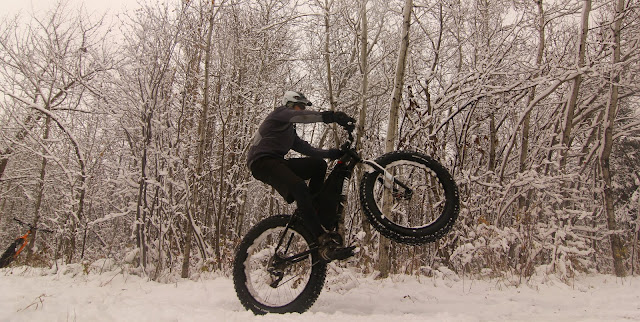 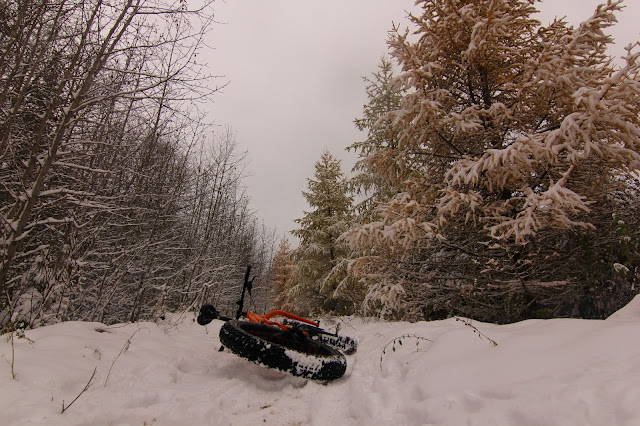 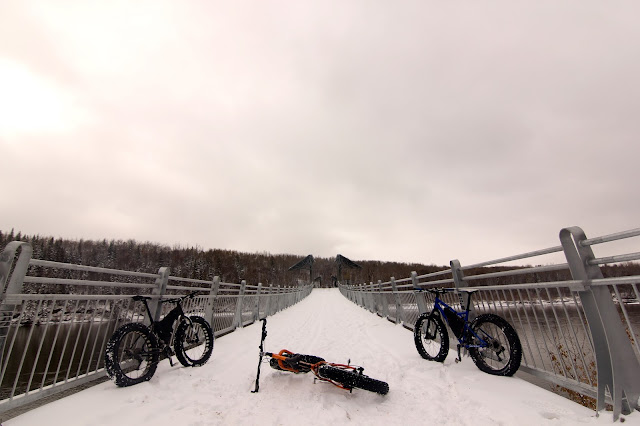 A ride meant to be by my lonesome ended up being joined by a couple who would have no part of that lonebiker nonsense. Kent and Gord met me in Mackinnon after a first time ride start in Emily Murphy. I had this ride planned in my head at work, as well as yesterdays but fell short due to snow. Tomorrow the plan was to ride Fort Saskatchewan but I am thinking the conditions will suck ass.

Is tomorrow a 'couch' day?

Who the hell cares! A ride happened today.

With the fresh snow there was no question as to what bike to bring today. After seeing the conditions yesterday I knew just what to do. Once I met up with the brethren we proceeded up Mackinnon and down into Laurier. Home of the puppies and shitty puppy owners. The descent into Laurier was sketchy as the fresh wet snow wanted to throw the bikes around like puppets. We rode like men and conquered and soon found ourselves climbing out and into the neighbourhood of Rio Terrace. Previous home of yours truly.

We dropped into Patricia and avoided all the singletrack (much to Gord's displeasure) and before we knew were at the new bridge leading to Terwillegar via Oliskew.

With a shitty barricade half out of the way we crossed and it was momentous. The first official crossing of the new bridge! As we got to the end security stopped us and nicely told us it is still a construction zone until midnight tonight when the city gets the keys handed over. So the bridge basically as of now is open. Giddy up!

The boys wanted to hit Go trail in Terwillegar and I knew my legs were pretty much done.  Being the true troopers they are the stuck with me heading back. Well Gord did. Kent was close to home so he was done.

In the end, the trails were awesome and the trails were sloppy. Nothing shitty like last Monday but when the mud came it came in droves. Sadly this means the last fat bike ride for a bit. Temperatures are heading up which will destroy this teaser we had.

Get ready for a few weeks of pure shit kids.