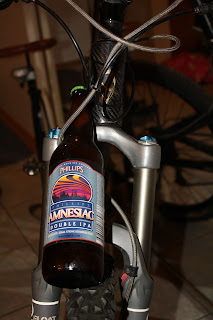 Finally a return to the beer reviews after a small hiatus. What do we all have to look forward to as far as beer reviews go after this? Two more weekends of no reviews. You see our main beer taste reviewers are doing the douchy thing and wanting more money therefore we will be outsourcing to Latin American beer reviewers, and I call that progress and progress takes time.

Phillips Brewing Company which comes from Esquimalt British Columbia, a proud home to Canada's Navy and what would be a pretty kick ass place to live! Year round nice weather, riding, and a hop skip and a jump from Seattle Washington, home of.... Oh never mind.

The Phillips Brewing website which features a rhyming history of the brewery made me cry as I read it and in my head MCA's voice was spilling out the lyrics. I then proceeded to take a sip for myself and then poured some on the ground for our lost Beastie Boy. My wife is gonna be a little pissed now as I soiled the carpet, but dang it! It was worth it.

The pour gave us a nice India Pale Ale  golden colour that helped me get rid of the sorrowing tears wallowing down my cheeks. A two and a quartered finger head presented itself long enough for the picture shoot. The first sip was what was expected from an IPA, a bitter beer but it gave so much more, hops dominated the taste which had a slight citrus tinge to it. The best part is at 8.5% you cannot taste the alcohol which I thank the hops for, I thank them indeed... 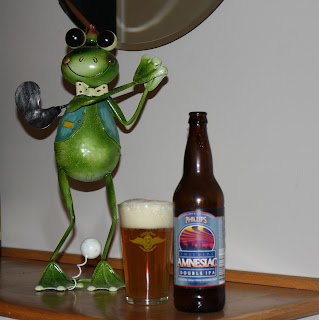